Dozens Injured During Friday Clashes in West Bank and Jerusalem 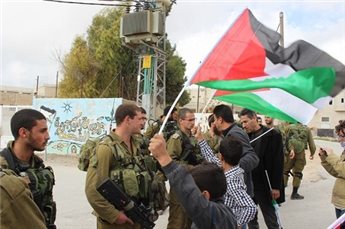 Dozens of Palestinians were injured during clashes with Israeli forces and settlers in the occupied West Bank and East Jerusalem on Friday, according to witnesses. Two Israelis were reported to have been stabbed in East Jerusalem, following confrontations.Demonstrators near Qalandiya checkpoint were met by Israeli soldiers who fired tear gas and live fire into the crowd, hitting a Palestinian youth in the foot.

According to Ma’an News Agency, an Israeli army spokesperson said that at least 80 Palestinians hurled rocks and Molotov cocktails at Israeli forces, lightly injuring one soldier.

In Hebron, clashes broke out near the Ibrahimi Mosque, referred to as the Cave of the Patriarchs by Jews, as several people were targeted with rubber-coated steel bullets. Israeli forces opened fired at Palestinians who attempted to reach the military checkpoint which divides the mosque and southern Hebron.

The army stated that over 350 Palestinians hurled rocks at Israeli forces, while two Palestinians threw a Molotov cocktail at the checkpoint, causing severe damage but no injuries.

Israeli military authorities in the city closed the checkpoint, located in the city center, following the incident.

Spokesman for the Coalition of Human Rights Defenders, Emad al-Atrash, said that this was the second time locals had burned down the checkpoint, which prevents Palestinians from accessing their homes and shops on Shuhada Street in order to ‘secure’ the area for Jewish settlers.

Mr. Al-Atrash said that, as a result of the last attack, Israeli authorities closed it to Palestinian traffic entirely, forcing hundreds of local residents who are given permission to pass on the street to travel kilometers to go around the thoroughfare.

Ma’an further reports that Israeli forces have severely restricted Palestinian access to Shuhada Street since 1994, turning the heart of Hebron’s Old City into a heavily militarized ghost town, as part of what they say is an effort to provide security to around 500 Jewish settlers who have taken over homes and evicted residents in the area.

Forces also dispersed a weekly march in al-Masara village, near Bethlehem, and assaulted protesters as they attempted to reach confiscated village land.

In Bethlehem, youth clashed with soldiers near Aida refugee camp while clashes were reported in Nabi Saleh and al-Bireh; several injuries were reported.

29-year-old Suzanne al-Kurd was struck by a car driven by an Israeli Jew as she walked in front of Shu’fat Mosque, in occupied East Jerusalem, leaving her lying in the street, in pain, with bruises all over her legs, her mother told Ma’an.

‘The incident was carried out in a deliberate manner because he ran her over and fled at high speed, all because my daughter was wearing an abaya and hijab,’ she said, referring to clothes often worn by religious Muslim women.

The woman was taken to a hospital for treatment.

Several anti-Palestinian hate attacks have been reported since late Thursday in Jerusalem and northern Israel, police and Israeli media said.

Another Palestinian claimed he was also attacked by a group of Israeli girls in the center of the city.

Police said they arrested four girls, settlers from the occupied West Bank, while a court banned them from Jerusalem for 15 days.

In northern Israel, unknown assailants reportedly threw acid on the car of an imam in Acre, late Thursday. Israeli police claim they are looking into the incident.

Ynet news site reported that a 53-year-old man was arrested near Haifa, after threatening Palestinian workers with a knife. The man was disarmed by one of the restaurant workers and finally arrested.

Three Israeli settlers were reportedly driving in their car in al-Tur, near the Mount of Olives, before suddenly stopping, exiting the car, and provoking residents.

Clashes then erupted in which two of the settlers were stabbed before fleeing in their car.

Following the incident, witnesses said Jewish settlers attacked several shops in al-Tur and attempted to assault people before being stopped by locals, causing further clashes in the area.

The two victims, aged 24 and 21, were reportedly walking to a yeshiva in the settlement area of Beit Orot, near the Mount of Olives, in the middle of a Palestinian neighborhood, when they were attacked.