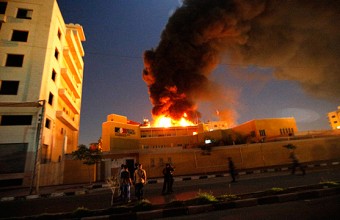 A Palestinian was injured, late Friday evening, in an explosion which occurred near the French Cultural Center in western Gaza City.Gaza police spokesman Ayman al-Batneiji told Ma’an News Agency that the explosion injured one Palestinian, adding that Gaza police, explosives engineering and the criminal investigations department arrived to the area and opened an investigation into the incident.

The Palestinian Ministry of Internal Affairs in Gaza stated on Saturday that they had opened an investigation, as well, into the explosion, which was the second one to occur at the same site in less than a month.

The Ministry condemned the attack, saying that the side responsible ‘does not belong to Palestinians, as culture is a major part of the Palestinian identity.’

Hamas leader Ahmad Yousef told Ma’an that the movement condemns the attack and that such an action does not serve the Palestinian cause.

“Why at this specific time at which France has a generous stand toward Palestine?” Yousef added.

The target of the attack was this recent strong stand by the French as a government, Senate, and people, the Ministry statement added.

On behalf of the Palestinian Authority, it pledged to follow up on investigations regarding the incident to identify those responsible, and to hold them accountable.