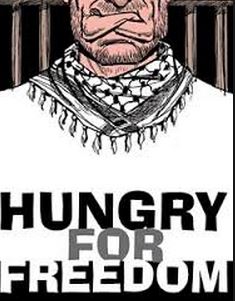 The Palestinian Detainees Committee has reported that seventy Palestinian political prisoners, held by Israel, are ongoing with the hunger strike they started more six days ago, demanding an end to Israel’s solitary confinement policies.The Committee said the detainees are also holding their strike in solidarity with detainee Nahar as-Sa’dy, held in solitary confinement, and ongoing with his strike for the third week.

In a statement released Saturday, the Committee said the Israel Prison Authority is threatening to transfer the detainees to a number of prisoners, including them holding them with Israeli prisoners, held for criminal violations.

The detainees said the strike will be expanded to include hundreds of detainees should the Prison Authority continue its assaults and violations against them, and against their visiting family members.

They added that more than thirty detainees have been recently moved into solitary confinement, in cold cells that lack the basic requirements for human use.

They said that some of the sanctions imposed on them include denying them the right to family visits, and transferring them to different prisoners, adding that the Prison Administration is refusing to negotiate with them, or even listen to their legitimate demands.

The Committee said the detainees, held in solitary confinement, are currently in the prisons of Eshil, Nafha, Majeddo, Asqalan, Ramla and Ramon, facing very harsh living conditions and constant violations.

In addition, the Palestinian Prisoners Society has reported that the Prison Administration in the Negev Detention Camp has informed 45 striking detainees it intends to transfer them to other, unspecified prisons.

The detainees in the Negev started their hunger strike seven days ago, and were informed they will be moved to other detention centers without allowing them to take any of their belongings with them.