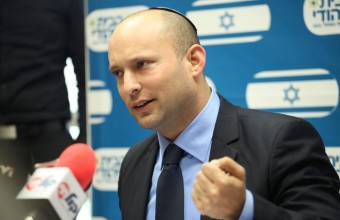 PNN reports that a group of Israeli and American academics calling themselves ‘genuine Zionists’ have sent written demands to the US government and European countries insisting that they impose sanctions on Israeli politicians Naftali Bennett, Uri Ariel, Moshe Feiglin and PM Benjamin Netanyahu.This demand, according to Haaretz, comes as a result of the call from the four Israeli party leaders for merging the West Bank into Israel, disrupting the peace process and international law.

The group is calling for the withdrawal of investments and the imposition of sanctions on the country, noting that though this campaign will not necessarily achieve peace, any extremist Israeli leader who violates international law must be punished, as any serious negotiations must be subjected to that law in order to achieve such a peace.

Furthermore, the group is demanding that the US freeze the four Israeli leaders’ bank accounts within the US and in EU countries, in addition to banning the extremist leaders from entering the United States and the EU as a punishment for their actions.

The petition was signed by 20 Israeli and American academics who said that the extremist Israeli actions are offensive to Israel.

The signatories state that it is time to make the necessary procedures to achieve peace and establish two states that will peacefully coexist.