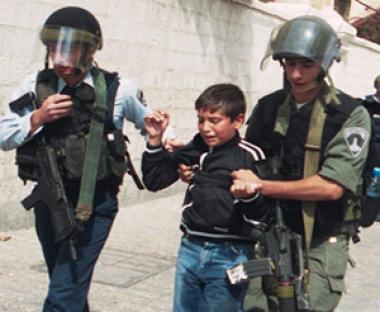 Heba Masalha, a lawyer working for the Palestinian Detainees Committee, managed to visit two Palestinian teens, held by Israel, who testified to her of horrific abuse and torture by the soldiers and the interrogators.On December 13, Masalha visited detainee Mahmoud Ahmad Hadra, 17 years of age, from the at-Tour town, in occupied East Jerusalem, held at the HaSharon Israeli prison.

Hadra told Masalha that when the soldiers broke into his family home to kidnap him, on July 21 2014, undercover officers assaulted him, and a soldier fired a rubber-coated metal bullet, wounding him in his leg, and causing serious bleeding.

He added that the soldiers, and undercover officers, then attacked him, and started kicking, beating and punching him, in addition to striking him with their rifles, causing injuries to various parts of his body, especially to his head.

The wounded teen was moved to the al-Maskobiyya detention center, where he remained under interrogation, torture and abuse for 30 days.

On his part, detainee Mahmoud Jamil Gheith, 17, from Silwan town in Jerusalem, and currently held at the HaSharon prison, said he was kidnapped on October 26 2014, at around 10 at night.

He was standing in front of his family home when a number of undercover soldiers assaulted him, and started kicking and beating him all over his body.

Gheith said the soldiers were punching him, kicking him, striking him on the head and back with their rifles, before they threw him onto the ground and dragged him for more than 200 meters while he was bleeding from several parts of his body, including his nose and mouth.

He was then placed in a military vehicle, where he was beaten again all the way to the al-Maskobiyya, while the soldiers were laughing and making fun of him.

Gheith was interrogated for 23 consecutive days; he was tortured, physically and emotionally, and was held in a very small, bug-infested cell.