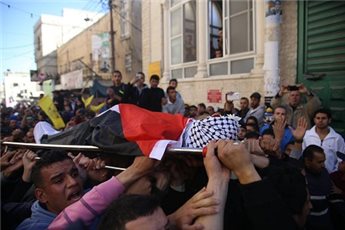 Over 10,000 people, on Tuesday afternoon, participated in the funeral procession of 21-year-old Mahmoud Abdullah ‘Adwan who was killed just hours earlier during an Israeli raid on the Qalandia refugee camp. Ma’an News Agency reports that over 30 Palestinians were injured with rubber-coated steel bullets, in clashes that broke out near Qalandiya checkpoint, during the procession. Most of the injured were taken to Ramallah medical complex, while the rest were treated at the scene.

‘Adwan’s body was taken to al-Quds University forensic institute before his funeral started at the camp’s mosque, proceeding towards al-Shuhada cemetery.

Mourners chanted for retaliation and raised Palestinian flags, while some masked participants fired shots in the air.

Additionally, a general strike was reported to have been observed in Qalandia, Kafr Aqab, Samirameis, and the Umm al-Sharayt area, north of Jerusalem.