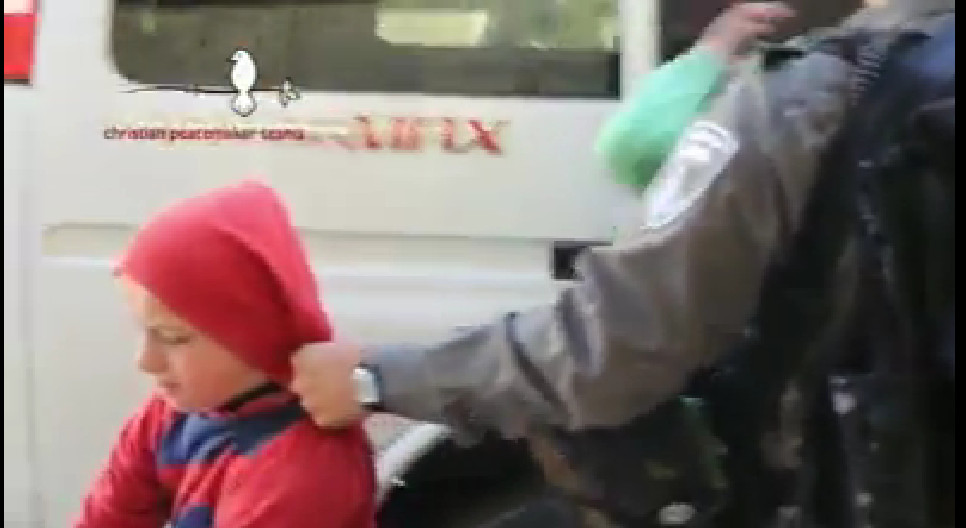 The Christian Peacemaker Team in Hebron videotaped an incident on Wednesday morning in which two small children are grabbed and held by soldiers. As the boys begin to cry and shake, multiple relatives attempt to intervene, but the soldiers end up abducting the children in an unmarked van.The mother of one of the boys is eventually allowed to go with them in the van, but another older male relative breaks down in tears after his intervention fails to free the young boys.

The soldiers accused the two boys of throwing stones, but provided no evidence to back this accusation. Mohammed Nabil Taha and Akram Zayed Al-Jamal were visibly shaking and crying while the Israeli border police held them by their collars for thirty minutes at Qitoun checkpoint 209 in Hebron, before pushing them into a white van and taking them away to an unknown location.

According to the Christian Peacemaker Team volunteers, ‘The two boys were hidden from view in a corner behind the military checkpoint. When the Israeli military vehicle came to take the children to the police station, the border police roughly grabbed the boys’ collars as the parents attempted to prevent the children from being taken away. One boy’s mother was eventually able to accompany them to the police station and support her son during this traumatic experience.’

Israeli troops frequently target young children for abduction and interrogation, despite international law forbidding this practice. A recent report by the Euro-Mid Center for Human Rights documented a widespread practice of punishments, illegal detentions, and violations of international agreements against Palestinian children by Israeli forces.

You can view the video taken by the Christian Peacemaker Team volunteers below: