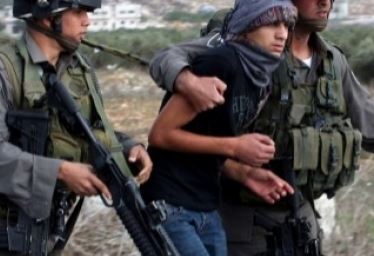 The kidnapped young man has been identified as Monir Radwan Ekhlayyel, 20 years of age; he was moved to the Etzion military base for interrogation. The soldiers searched and ransacked his family home.

Soldiers also invaded the Sammoa’ and ath-Thaheriyya towns, near Hebron, drove around in various neighborhoods, and withdrew during early morning hours, Sunday.

In addition, soldiers invaded Silwan town, south of the Al-Aqsa Mosque, in occupied East Jerusalem, and kidnapped one Palestinian after breaking into his home and violently searching it.

Local sources said the soldiers kidnapped Emad ‘Obeisan from his home in Ein al-Lowza neighborhood, and took him to an interrogation center in the city. ‘Obeisan is a former political prisoner.

Furthermore, the Israeli army said it managed to locate “stolen weapons and military equipment,” and kidnapped eight Palestinians, in Jaba’ village, south of Jenin, in the northern part of the occupied West Bank.

Israeli Channel Seven said the soldiers found two pistols, a number of laptops, binoculars and night-vision equipment, and several magazines of automatic rifles, in additional to more than 200.000 New Israeli Shekels, and foreign currency, in the homes of the eight Palestinians.

Furthermore, the Israeli army said its soldiers kidnapped two Palestinians, allegedly after they crossed the border fence, in the northern part of the Gaza Strip.