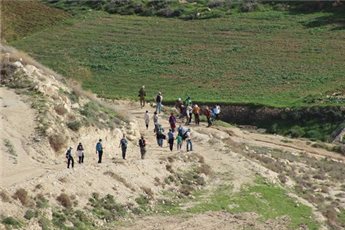 As Palestinian Christians in Bethlehem prepare for the annual Christmas celebration — the biggest day of the year in the city where Christians believe that Jesus was born — a group of Israeli settlers invaded the area on Sunday in preparation for the establishment of another illegal colony on stolen Palestinian land.The area in question is the neighborhood of Beit Bassa, located in the eastern part of Beit Sahour, the town next to Bethlehem which is known to Christians as the place where the shepherds saw the angel directing them to the birthplace of Jesus.

The settlers arrived with an Israeli military escort, and walked around near Palestinian homes, farmland and shops, causing no damage but taking numerous pictures, apparently for surveying purposes to plan for the construction of a new illegal settlement colony.

Already in Beit Sahour, an abandoned Israeli military base called Ush Ghraib has been re-inhabited by Israeli soldiers and settlers who hope to establish a permanent militarized settlement colony on the site — despite the illegality of such a measure.

Another local site, the mountain known as Abu Ghneim, was illegally seized by Israeli forces in the 1990s and has been turned into the large settlement colony of Har Homa.

Over 500,000 Israeli settlers currently live in illegally established settlement colonies in the West Bank and East Jerusalem. The Israeli government has a policy of recognizing these colonies once they are established, then providing infrastructure including electricity, water, sewage and trash pickup services, as well as military protection — despite the fact that these colonies are constructed on stolen Palestinian land.

The establishment of new Israeli colonies is usually preceded by the type of ‘site visit’ that was endured by the residents of Beit Bassa on Sunday. The Israeli settler colonizers then move in under cover of night with RVs and truck containers, which they place on a site and begin to reside there. Palestinians who attempt to get their land back through legal means are rebuffed by the Israeli court system which provides them no legal protection.