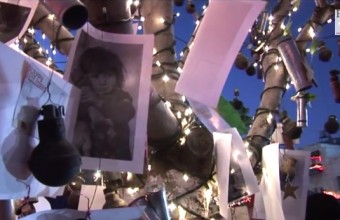 The Popular Struggle Coordination Committee, this year, in the Hall of the Nativity, Bethlehem, lit up a Christmas tree decorated with teargas grenades, sound bombs, pictures of injured and murdered children, and the missile leftovers used by Israeli occupation forces against the Palestinian people. The tree aimed to deliver the message that the Holy Land of Palestine still suffers under the Israeli occupation even in the midst of joyous celebrations.

According to the Palestinian News Network (PNN), member of the Coordination Committee, Mazen Al-Azzeh, said that the tree was dedicated to (about) 50 Palestinians who engaged in popular non-violent resistance and were killed by Israeli forces this year, in addition to over 2,000 Palestinians, mostly children and women, killed in Gaza over the summer.

Mr. Al-Azzeh added that the tree was a symbol of popular struggle on the occasion of the birth of Jesus Christ, to convey the message that, despite the celebrations, Palestine was still under Israeli occupational siege and suffering from land seizure and hostility at military checkpoints.

Popular Struggle Committee coordinator, Jamal Jum’a, said that this was the second year for such activity by the committee.

Jum’a reiterated the reminder to the world that Palestinians are deprived of full-hearted celebratory spirits, because of the ongoing occupation of the land and the resultant oppression of its people.

In addition, the tree serves as a memorial for Minister Ziad Abu Ein, Head of the Committee against the Wall and Settlements, who was attacked by Israeli soldiers and killed after being beaten and suffocated by teargas. The Minister was killed while leading a peaceful demonstration with the aim of planting olive trees on Palestinian land threatened with Israeli confiscation in the occupied West Bank village of Turmus’ayya, North Ramallah.

Popular struggle activist, Abdullah Abu Rahma, said that Minister Abu Ein, previously planned on setting the symbolic Christmas tree in Bethlehem’s Hall of the Nativity and, so, the tree was decorated there, according to his will.

Additional photos at the PNN.

The committee added that the tree contributes a challenge to Israeli apartheid policies and the propaganda that has deceived the world for decades.

Salah Khawaja, coordinator in Bil’in, said that the tree displayed the daily Israeli violations in Palestine, and aimed to send message to the pilgrims, tourists and visitors to the Church of the Nativity where Jesus Christ was born, that peace cannot be under an occupation.

The tree was a loud cry of longing for an occupation-free, peaceful life in the Holy Land of Palestine.

Also from the PNN: VIDEO: Christmas at Bethlehem 2014