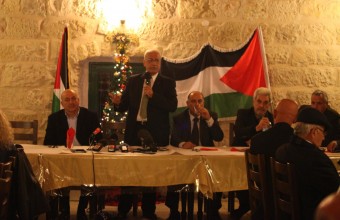 In a statement received by the PNN, PLO Executive Committee Member Dr. Saeb Erekat said that the State of Palestine has signed a number of international treaties, all of which are consistent with the values of the nation, the foremost of which is respect for international human rights and humanitarian law.’Yesterday evening, the Security Council was presented with an opportunity to reaffirm its commitment to peace by approving a resolution that is in conformity with international law and several previously adopted United Nations resolutions. Although the majority of the Security Council voted in favor of the resolution, certain countries continue to actively block steps towards ending Israel’s belligerent occupation and its systematic violations of international law,’ the statement said.

‘We signed the treaties, and particularly the Rome Statute of the International Criminal Court, in order to ensure the protection and advance the rights of our people. There must be accountability and those who are concerned about courts, should stop committing crimes’, Erekat added.

According to the PNN, this does not constitute a unilateral step. On the contrary, it is a step towards the internationalization of the solution.

‘Tonight, we call upon the international community to assume its responsibility in order to achieve a just and lasting peace in Palestine, including ending the occupation that began in 1967. We have provided our people, and all those who seeking a just peace, a horizon of hope,’ Dr. Erekat further stated.

He assured that the international community will stand by the Palestinian people, as they seek to exercise the long overdue rights of the state and of the people.

1. Convention on the Political Rights of Women

2. Convention on the Recognition and Enforcement of Foreign Arbitral Awards (the ‘New York Convention’)

3. Basel Convention on the Control of Transboundary Movements of Hazardous Wastes and their Disposal

5. Protocol Additional to the Geneva Conventions of 12 August 1949, and relating to the Protection of Victims of Non-International Armed Conflicts (Protocol II)

6. Protocol Additional to the Geneva Conventions of 12 August 1949, and relating to the Adoption of an Additional Distinctive Emblem (Protocol III)

7. Convention on the Law of the Non-Navigational Uses of International Watercourses

8. Convention on the Prevention and Punishment of Crimes against Internationally Protected Persons, including Diplomatic Agents

11. United Nations Convention on the Law of the Sea

12. Convention on the Non-Applicability of Statutory Limitations to War Crimes and Crimes against Humanity

13. Agreement on the Privileges and Immunities of the International Criminal Court

15. Declaration in accordance with the Rome Statute of the International Criminal Court

16. The Convention on Prohibitions or Restrictions on the Use of Certain Conventional Weapons

17. The Treaty on the Non-Proliferation of Nuclear Weapons