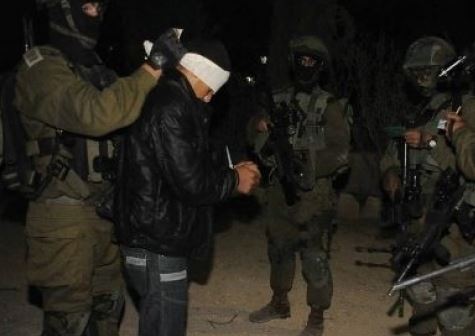 Israeli soldiers kidnapped, on Monday at night and Tuesday at dawn, three Palestinians in the southern West bank city of Hebron and the Sammoa’ nearby town, and kidnapped three Palestinians. Soldiers also invaded several Palestinians communities in Ramallah and Jenin.Local sources said several military vehicles invaded Hebron city and kidnapped one Palestinian after breaking into his home and violently searching it. The kidnapped resident has been identified as Abdul-Mo’ty Abu Shanab.

Soldiers invaded various neighborhoods in the city, installed a roadblock on its northern entrance, in addition to installing roadblocks on the main entrances of Sa’ir and Halhoul towns, before stopping and searching dozens of cars, and interrogated the passengers while inspecting their ID cards.

The soldiers violently searched the homes causing property damage before withdrawing from the area.

On Monday evening, soldiers kidnapped Ahmad Mousa al-Khalayla and Ma’moun Mohammad al-Khalayla, in the Etzion Military Base, north of Hebron.

The army initially invaded the homes of the two Palestinians, handed them military warrants for interrogation in Etzion, and kidnapped them after they arrived in the base.

In related news, soldiers invaded on Tuesday at dawn, several neighborhoods in the central West Bank city of Ramallah, and clashed with dozens of local youths who hurled stones and empty bottles at them, especially in Ramallah at-Tehta area.

The soldiers also invaded Deir Qaddis town, west of Ramallah, in addition to the northern West Bank city of Jenin, Sielet al-Harethiyya and al-Yamoun nearby towns, and handed two Palestinians military warrants for interrogation, after breaking into their homes and ransacking them.