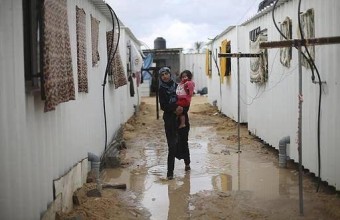 After three infant deaths as a result of severe winter weather in the Gaza Strip, one and a half year-old Fadi Qudeih passed away on Tuesday, in a caravan house where his family lives.According to the PNN, the child’s home was demolished during the Israeli attacks on Gaza this past summer, upon which his family moved to live in a caravan, in the region of Khan Younis, southern Gaza Strip.

The infant was found dead of severe cold, and moved to Nasser hospital.

The snow storm, Huda, which recently hit the region with temperatures that plummeted to some -4 degrees, has so far caused the deaths of at least five Palestinians, four of whom were infants between the ages of 1 month to 1.5 years old.

Local sources also reported that a baby named Adel Al-Laham (one month old), who lived with his family in similar housing, died after the dramatic drop in temperature.

Ahmed Lahham, age 22, from southern Gaza also died as a result of inappropriate housing, after the Israeli attack on Gaza which left half a million Gazans with no shelter.

Gaza Civil defense spokesman, Mohammed Meidane, said Saturday that the winter temperature fall caused the flooding of numerous homes, adding that about 152 homes were evacuated from the southern part of the Gaza Strip after water flooded their houses, adding that civil defense was able to protect only 47 homes threatened by floods.