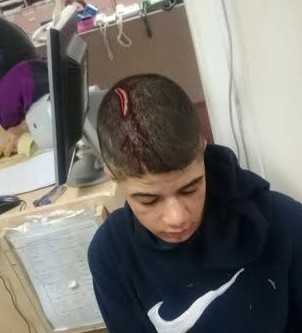 The Wadi Hilweh Information Center in Silwan (Silwanic), in occupied Jerusalem, has reported that undercover soldiers of the Israeli army assaulted, on Monday, a Palestinian child, causing various head and facial injuries, and then kidnapped him. The assault took place in the central neighborhood of Silwan; the child has been identified as Mohammad Gheith, 16 years of age.

His family said that he was standing in front of his home when the soldiers attacked him, beat him with their batons on the head and face, and kidnapped him. .

One of his friends said that they were in the neighborhood when three undercover soldiers approached him, before one of them shouted his name (Mohammad Gheith).

The soldiers then pushed him against a wall, removed his clothes and searched him.

His friend also said the soldiers then ordered Mohammad to put on his clothes, and started beating him with their batons and rifle-butts, punching him repeatedly.

The soldiers took the wounded child to illegal outpost of Bet Yonatan, while he was shouting from the pain in his head and limbs.

The soldiers then took the wounded child to the police station on Salah Ed-Deen Street while still bleeding, and later moved him to the Hadassah Hospital in Jerusalem.

Mohammad’s father said the soldiers released him, and then ordered him to return for “further interrogation”.

The police claims that the 16-year-old child attacked seven Israeli soldiers who “were trying to arrest him in Silwan”.

The father said he will be filing a complaint to the police investigation unit (Mahash), as the officers attacked his son without any cause or provocation.

“There are surveillance cameras in the neighborhood,” he said. “What they captured completely contradicts the Israeli claims; what they did to Mohammad is a savage attack.”

Earlier on Tuesday, Israeli soldiers invaded al-‘Isawiyya, in occupied East Jerusalem, where they kidnapped a young Palestinian identified as Ahmad Zomorrod, after beating and kicking him, causing various cuts and bruises to his head, face and several other parts of his body.

The soldiers also kidnapped thirteen Palestinians in Jerusalem and the West Bank.