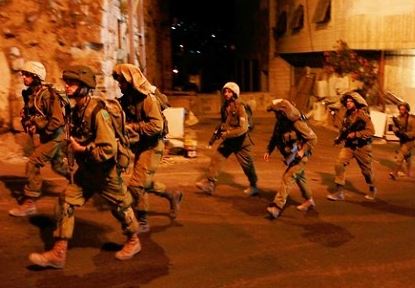 Israeli soldiers opened fire, on Thursday evening, on a Palestinian car at the Huwwara military roadblock, south of the northern West Bank city of Nablus, allegedly after the driver failed to stop, and “attempted to ram a soldier.”Israeli media sources quoted an army spokesperson claiming a young Palestinian man was speeding towards the roadblock, and that the soldiers opened fire after the driver “failed to heed to the soldiers commands to stop.”

The driver managed to escape unharmed, while the army claimed the car he was driving is a stolen vehicle. The soldiers are still searching for the driver, the army said.

In related news, soldiers closed the Za’tara roadblock, south of Nablus, allegedly, after shots were fired at the soldiers from a Palestinian car.

Eyewitnesses said the soldiers closed the roadblock, and searched dozens of Palestinian cars while inspecting the ID cards of the passengers, and interrogated scores of Palestinians.

In addition, Israeli sources said a number of Palestinian youths hurled stones at settlers’ cars on Road #60, between the ’Ofra and Shilo illegal colonies, near the central West Bank city of Ramallah.

The sources said five Molotov cocktails were thrown on settlers cars, and that the attack led to no damages or injuries.