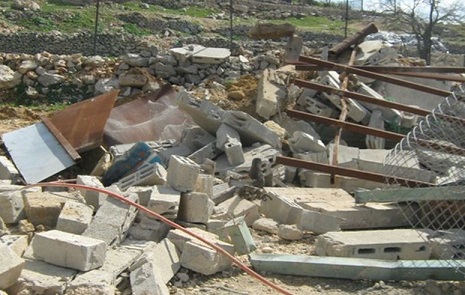 Scores of Israeli soldiers invaded, Wednesday, the al-Mogheer Palestinian village, in the central West Bank district of Ramallah, demolished a barn and a tent belonging to a local villager, after the army claimed the area was a “closed military zone.”The army said the Palestinians cannot live in this area, and cannot even use for grazing purposes or agriculture.

Member of the Union of Agricultural Work Committee, Fayez Abu ‘Alia, said Israel’s violation is part of ongoing policies that aim at making it difficult for the villagers and farmers to earn their daily living, in an attempt to push them to leave.

“The soldiers frequently assault the villagers and shepherds, repeatedly invade their communities at night, confiscate their cattle, demolish their homes and sheds” he said, “Such violations include physical assaults, and denying the villagers access to their own lands.”

Several members of the Agricultural Work Committee visited the area, while their lawyer Ashraf an-Nashasheeby met with farmers and shepherds, and stressed on the importance of immediately informing the committee of all violations as they happen so that it can file all needed legal work in a fast and a professional manner.

The Committee has been working in Area C of the occupied West Bank, under full Israeli military and civil control, planted trees along with the villagers, in addition to providing them with seeds to plant, and paving a road that enables them to reach their lands.

Soldiers Abduct A Palestinian In Al-Aqsa