ISM Report: “We will hit your wife, your daughter, and your kids” 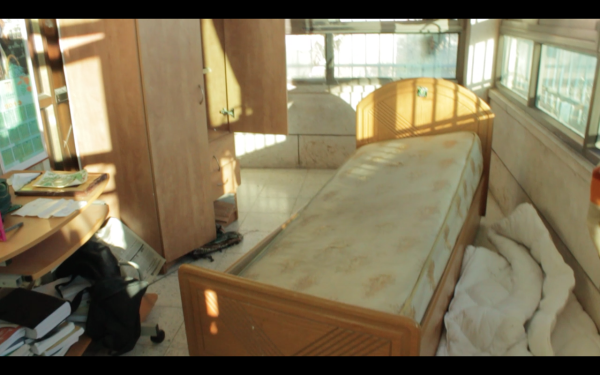 Early Tuesday morning January 20, 2015 at 3:00 AM, Israeli occupation forces invaded the home of the Abu Maria family in the village of Beit Ummar.

The occupation army used explosives to open the front door, surprising the sleeping family. This is the second violent night raid the family has experienced this week. Israeli soldiers were looking for Nidal, Ghassan, and Mohammed Abu Maria, three brothers who were summoned by the Israeli intelligence for questioning.

The mother of the family, 42 years old, was attacked as soon as the invading soldiers entered the home. Her arms were violently jerked behind her back, and once she was tied up, she was beaten on her head, neck and arms. One of the family’s five sons, Mohye, 18 years old, was cut on his face, neck and fingers. The attacking soldiers demanded he tell them where his brothers were.

The family’s father, Ahmed Abu Maria, has been imprisoned by the Israeli occupation forces for four months. The morning of the attack, Ahmed was taken into interrogation where Israeli investigators informed him that his family would be targeted that night. Ahmed related that he was told: “Tonight we will go to your family’s home. We will hit your wife, your daughter and your kids.” He was not allowed to warn or communicate these threats in any way to his family. The next day, Ahmed was allowed to contact his family and hear what happened to them during the night raid. The family describes this as psychological torture, designed to put pressure on the imprisoned father.

The occupation forces remained at the family’s home until nearly 7:00 AM. When they finally decided to depart the house, the invading soldiers left behind two official requests in Hebrew for the appearance of Nidal, Ghassan, and Mohammed the following morning at 8:30 AM at the prison in the nearby illegal settlement of Kfar Etzion. The family tried to explain to the occupation forces that two of the sons did not live in Beit Ummar, but farther north and it would be impossible for them to make the trip in time.

During the violent invasion at the Abu Maria’s house, the occupation forces also searched the neighboring uncle’s home for the youths. When they did not find the boys there as expected, and the family refused to tell the authorities exactly where they were living, the occupation forces stole over 3000 NIS (approximately $760 USD) from the uncle. This money was his life savings; without it, he does not know how he will survive.

Next morning the 20-year-old middle brother Ghassan Ahmad Abu Maria presented himself at Kfar Etzion prison as requested and was arrested. He is currently being held without charges and the family has been unable to get any information on his condition.