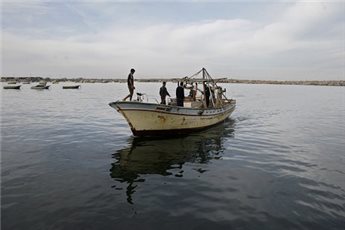 The Egyptian navy, on Friday, shot and injured a Palestinian fisherman for allegedly entering Egyptian waters south of Gaza, according to officials in Egypt.Ma’an News Agency reports that a Palestinian boat with two fishermen crossing into its territorial waters was spotted off the coast near Sheikh Zuweid, in northern Sinai.

Naval forces demanded that it stop, but the fishermen continued to flee the area and Egyptian forces opened fire.

35-year-old Ihab Zuheir Hassan al-Amuri was shot in the stomach, while the other unidentified fisherman was arrested and taken in for interrogation.

There are 4,000 fishermen in Gaza. According to a 2011 report by the International Committee of the Red Cross, 90 percent are impoversihed, an increase of 40 percent from 2008 and a direct result of Israeli limits on the fishing industry.

This past December, Israeli media claimed that a fisherman detained from Gaza was smuggling weapons to Hamas from Sinai, using his fishing boat.

However, an Israeli blockade has been in place since 2006 (and backed by Egypt since 2007), which severely limits the transfer of goods in and out of the Gaza Strip,including materials necessary for building fishing boats, and has led to severe humanitarian crises and hardships for Gazans.