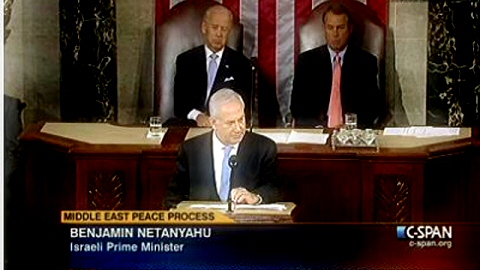 Netanyahu will not hesitate to use his Republican friends to give new momentum to his election campaign that has failed to take off.The White House and State Department are furious that Benjamin Netanyahu has been invited to speak before both houses of Congress, without the accepted diplomatic protocol of informing President Obama and his Secretary of State, John Kerry. This is unheard of in diplomatic relations between the two states.

The Israeli prime minister continues, after a term and a half, to consider Obama as an intruder in the White House, a hiccup, one who can and must be circumvented. For Netanyahu, America is the neo-conservatives of the Republican right, the majority in both chambers and with whom he corresponds directly, bypassing the executive head.

Beyond the electoral considerations – a tough speech in front of American public officials does not hurt a few weeks before Israel’s elections, the results of which are far from decided yet – what does the Likud leader seek from this visit? The answer to this question is eye-watering: to enact additional sanctions against Iran so as to frustrate the negotiations between Washington and Tehran.

As we’ve often noted in this blog, Tehran is Netanyahu’s Carthage: it must be destroyed! Regardless of the significant changes of direction and political lines in Iran, what to mention its rapprochement with the US or even reports of the Israeli intelligence, Tehran remains in the eyes of Israeli neo-conservatives as the number one strategic threat number one, against which a war is inevitable.

The murder in Syria of an Iranian general, which has been attributed to Israel, is part of this strategy of tension with Iran. Still, for Washington, the current priority is the fight against ISIS, a struggle in which the participation of Iran is essential. Beyond political considerations that make Netanyahu a part of the Republican camp, there is a genuine disagreement in the analysis of strategic priorities in the Middle East. It is nevertheless unlikely that the US administration will intervene in the Israeli elections to support Livni-Herzog, although the latter two have made improvement of relations with the White House a central element of their election campaign. Netanyahu, in contrast, will not hesitate to use his Republican friends to give new momentum to his election campaign that has failed to take off.