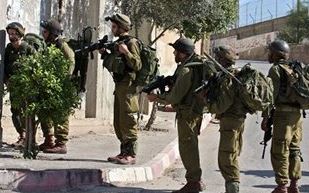 Israeli soldiers invaded the Old City of Hebron, in the southern part of the occupied West Bank, and kidnapped four teenagers after breaking into their homes. Army also installed roadblocks near various towns in Hebron, and invaded several towns near Jenin, in the northern part of the West Bank.Local sources in Hebron said the soldiers invaded in Old City, and kidnapped four Palestinian teenagers, before taking them to the Etzion military base.

In addition, soldiers installed roadblocks in the Joret Bahlas area, at the northern entrance of Hebron city, in addition to the main entrances of Sa’ir and Halhoul towns, and the al-Fawwar refugee camp, stopped and searched dozens of Palestinian cars, and searched them while inspecting the ID cards of the passengers.

Several military vehicles invaded Ya’bad town, south of the northern West Bank city of Jenin, broke into and searched a number of homes, and interrogated the families; no arrests were reported.

In occupied Jerusalem, soldiers invaded, earlier on Saturday, the towns of Abu Dis and al-‘Ezariyya, in addition to at-Tour and Wadi al-Joz neighborhoods, and clashed with dozens of local youths who hurled stones and empty bottles at them.

The soldiers detained five Palestinians, including a journalist identified as Rami ‘Allariyya, held them in Police stations in Ma’ale Adumim settlement and al-Jabal military camp, and released them later on.