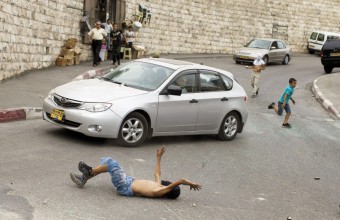 An Israeli settler, Friday evening, ran over a boy of five with his car, in Tulkarim, and then fled the scene.The child’s family, who lives in Shofa village, in Tulkarim, reported that the settler, who is believed to be from a nearby settlement built on the village’s lands, ran over their child, Nabeel Hasan Drobi, who was near the bypass road south of Tulkarim when the settler attacked him.

Thabet Thabet hospital, where Nabeel is receiving treatment, reported that they provided immediate treatment to Nabeel and that he’s now in stable condition, according to the PNN.

It is but one of several similar incidents that have occurred amid ongoing tensions in the West Bank. Such crimes are rarely reported by Western media, placing Israelis in a false light of constant victimization by its neighbors when, in fact, quite the opposite is true, as in the case of teenager Mohammad Abu Khdeir, who was tortured and burned alive by Israeli settlers last summer.

Palestinians, both Christian and Muslim, live under daily threat of violence and vandalism by Israeli soldiers, police and civilian settlers alike.

Other recent similar incidents: Child Seriously Injured After Being Struck By Settler’s Car In Hebron

Yet Another Settler Hit and Run on Hebron Child