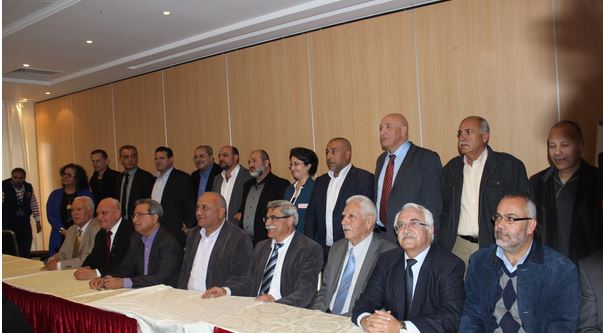 Arab parties in Israel announced they would be running in the upcoming Israeli Knesset election, scheduled for March 17, in a unified list that could increase their representation from 11 to a minimum of 12-15 seats. The lists represents all parties, including Islamist and communist movements.The agreement came following negotiation sessions that took place over the past five weeks, with the intention of forming a unified list that represents all Palestinians in the country, regardless of their affiliations and faiths.

The parties initially agreed to run in the election in one list or two at most, especially after Israel raised the required minimum of votes from %2 to %3, an issue that was seen as an attempt to limit the number of Arab seats.

The first fifteen seats of the list include the Democratic Front for Peace and Equality, with five seats, including a seat for a Jewish legislator, and four seats for the Southern Branch of the Islamic Movement.

The agreement includes four seats for the National Democratic Assembly and two for the Arab Movement for Change, while smaller parties will have rotating seats, should the unified bloc fail to garner more than 15 seats.

Mohammad Ali Taha, head of the Unity Committee that ran the negotiations between different parties, said in a press conference on Friday evening that the list “symbolizes hope for the people,” and comes “to prevent Israel’s right-wing parties from returning to power.”

Ramez Jarayse, a leader of the Democratic Front, said forming this unified list is coherent with the current changes on the ground, on the national, regional and international levels, and is essential to counter the Israeli attempts to keep the Arabs away from the political arena.

“We have a lot in common ground work, larger than our differences,” he said, “we are forming a partnership; each party will still be independent in its social stances, its own ideology and politics.”

National Assembly Legislator, Dr. Jamal Zahalka, described the unified list as a historic event that could rewrite the history of Israeli politics.

“This is a historic day, we might not be aware of that, but we should, we want to thank the thousands, the parties, every person who pushed for unity,” he said, “This unity wasn’t born just after a few weeks of talks, but after long months, this is the first time Islamists, Communists, Nationalists and leftists unite in one single coalition.”

Knesset Member Massoud Ghanayem of the Islamic Movement called on all Arabs in the country to support the unified list.

“Do not disappoint us, support the new birth, the newborn is you, is unity; to those who say we cannot unite, I say we are united,” he said “yesterday I was representing the Islamic Movement in the negotiations to get the largest number of seats, today we are all one, united in one list, hoping for a larger Arab representation.”

“We urge you to march in the thousands, to vote, to slap Lieberman who fears our unity, let us act on ensuring a large Arab representation,” Ghanayem said, “Let our representation reach the Negev, reach every part of the country.”

“Those who boycott the Knesset election should support this unified list,” Zoabi said, “Unity’s main goals are countering carelessness, despair and fear; we have a struggle, and a mission to regain the public trust in Arab parties.”

She also said the new list should transform the Arab parties into a new era that dictates new rules to Israeli politics.

Israeli Foreign Minister Avigdor Lieberman of the extremist Israel Our Home Party was angered by the latest developments, and alleged that this unity targets Israel’s very existence.

“Now we see what they always kept hidden, what we already knew, their true mission,” Lieberman said, “Whether they are Islamist, Communists or Jihadists, they are all united to bring an end to Israel as a Jewish State.”