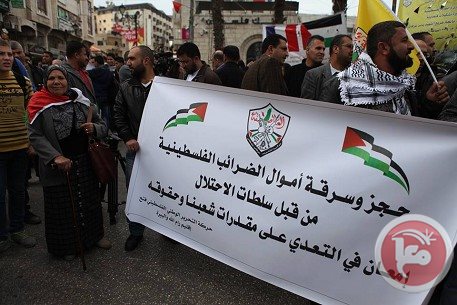 Hundreds of Palestinians in the occupied West Bank, on Monday, participated in protests organized by the Fateh movement, calling for a boycott of Israeli products and expressing support for Palestinian officials.Ma’an reports that, in Ramallah, hundreds gathered at al-Manara Square in protest of Israel’s decision to freeze tax funds owed to the Palestinian Authority.

Jamal Muheisen, a member of Fateh’s Central Committee, said that Israel ‘should not be allowed to steal our money and gain profits by selling their products in our markets.’

‘Despite several boycotting campaigns there are still Israeli products in our markets,’ Muheisen said. ‘Our merchants and officials should not allow this to continue.’

He told Ma’an that the marches were organized in order to increase support for Palestine’s international political actions, referring to UN Security Council resolutions and Palestinian membership of the International Criminal Court (ICC).

Another Fateh Central Committee member, Mahmoud al-Alul, said that the protests were sending a message to the world that Palestinians supported their leaders.

Similar protests were held in Tubas.

He added that popular resistance and the boycott of Israeli products should be escalated.

Abbas, himself a Fateh member, has repeatedly said that he does not support the boycott of Israeli products.