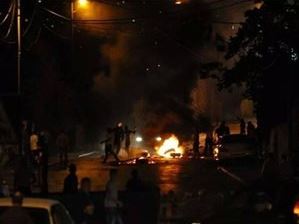 Undercover soldiers of the Israeli military kidnapped, on Monday evening, a 10-yea-old Palestinian child near his family home in Shu’fat neighborhood, north of occupied Jerusalem, and released him later on.The child was walking back home after buying some groceries from a shop next door, and as he was entering the main gate of the residential building, the undercover soldiers assaulted and beat him, before kidnapping him.

The child was handcuffed and blindfolded before the undercover soldiers placed him in an Israeli car, and drove away.

Talking to Maan News, his uncle denied reports that Israeli settlers kidnapped the child, and said the kidnappers were undercover Israeli soldiers, who were initially believed to be settlers.

The Israeli Police in occupied Jerusalem said it arrested a child who allegedly “hurled stones at the light rail.”

The kidnapping of the child led to clashes between the soldiers and local youths who hurled stones and empty bottles at them, while the army fired gas bombs and concussion grenades.

Later on, the police unconditionally released the kidnapped child.