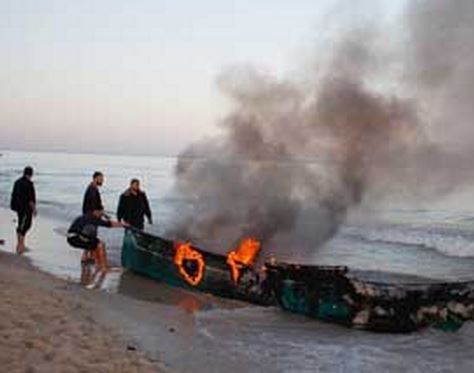 A Palestinian fishing boat drowned, on Monday evening, after Israeli navy ships fired rounds of live ammunition at it in Palestinian waters, west of Gaza city. The soldiers also kidnapped four fishermen.Eyewitnesses said the navy first fired live rounds at the boat, then used loud speakers ordering the four fishermen on board to jump in the cold water, and swim towards them.

The four were then cuffed and blindfolded, before they were taken to an unknown destination.

The boat belongs to members of the al-Habeel family, for whom fishing is their only source of livelihood.

The attack is one of hundreds of similar assaults and violations carried out by the Israeli army against the Palestinians in the besieged and impoverished coastal region.

This agreement includes allowing Palestinian fishermen to sail within 6 nautical miles in the Gaza Sea, with an incremental expansion in the allotted area.

In its weekly report for the period between January 15-24, the Palestinian Center for Human Rights said Israeli navy forces opened fire at Palestinian fishing boats 4 times on 17, 18, 20 and 21 January 2015.