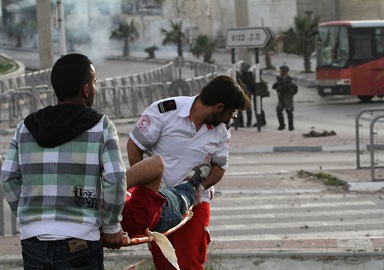 Medical sources have reported, Tuesday, that three young Palestinian men have been injured by Israeli rubber-coated metal bullets, while many suffered the effects of tear gas inhalation, near the northern entrance of al-Ram town, north of occupied Jerusalem. The three were shot, earlier on Tuesday morning, while dozens of residents were protesting the army closure of the main entrance of their town with concrete blocks.

All wounded Palestinians received treatment by local medics as their injuries did not require hospitalization.

On Tuesday evening, soldiers kidnapped three Palestinians near the Salem Israeli military roadblock, in the northern part of the West Bank.

|Related Report| “37 Children Exiled From Their Homes In Jerusalem, 253 Under House Arrest”.