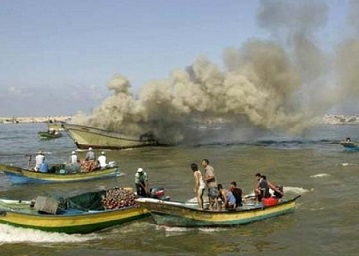 Israeli Navy ships attacked, on Thursday morning, a number of Palestinian fishing boats in the Sudaniyya Sea, northwest of Gaza City, opened fire on them and forced them back to the shore.The Palestinian News & Info Agency (WAFA) said the navy fired rounds of live ammunition on the Palestinian boats, although they were within the six nautical miles allotted for the Palestinians for fishing.

WAFA added that the navy fire completely disabled one of the fishing vessels; no injuries or arrests were reported.

The navy frequently attacks the fishermen in Gaza territorial waters, and even while docked on the Gaza shore, in direct violation of the ceasefire agreement.

The attacks include kidnapping the fishers and confiscating their boats, and have in many cases led to casualties, including death.

On Wednesday morning, soldiers stationed across the borders with the Gaza Strip opened fire at Palestinian fields east of Khan Younis.

On Monday evening, the navy opened fire on a fishing boat, in Palestinian waters, west of Gaza city, causing it to sink, and kidnapped four fishermen.