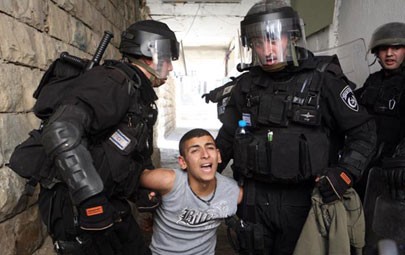 Monqeth Abu ‘Atwan, head of the Palestinian Detainee Committee in Bethlehem, said the soldiers ransacked his home, and kidnapped his son Mohammad, 15 years of age.
Mohammad was previously imprisoned by Israel, and was only released a few days ago.

Mohammad Awad, spokesperson of the Popular Committee Against the Wall and Settlements, said more than fifteen soldiers stormed his home, and violently searched it, before kidnapping his son Ahmad.

Clashes took place in the town, after the soldiers invaded it and kidnapped the Palestinians; the army fired several gas bombs and concussion grenades.

Several Palestinians, and workers of a local bakery, suffered the effects of tear gas inhalation.

In Jerusalem, soldiers broke into and ransacked a number of homes in the at-Tour town, overlooking the Old City, and kidnapped two Palestinians before moving them to the al-Maskobiyya interrogation center, west of the city.

The Ad-Dameer Prisoner Support and Human Rights Association said the kidnapped have been identified as Faisal Abu al-Hawa, 17, and Mohammad ‘Afif Abu al-Hawa, 17.