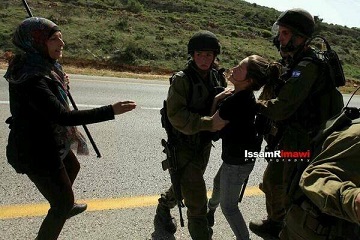 Israeli soldiers invaded, on Thursday at dawn, the village of Nabi Saleh, northwest of the central West Bank city of Ramallah, leading to clashes with local youths. One Palestinian has also been kidnapped in Beit Rima nearby village.Local sources said the soldiers fired dozens of rounds of live ammunition, gas bombs and concussion grenades, while a Molotov cocktail, hurled by a protester, directly struck an Israeli military vehicle.

The soldiers were heavily deployed in different parts of the village after completely sealing all of its entrances, local sources said.

In related news, a number of Israeli military vehicles invaded Beit Rima nearby village, kidnapped one Palestinian, identified as Mahmoud ar-Rimawi, and took him to an unknown destination.

Another young man was briefly detained and interrogated.