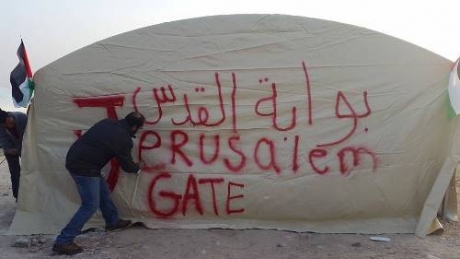 Israeli soldiers demolished, on Thursday at dawn, the Jerusalem Gate protest village, in Abu Dis town in occupied East Jerusalem, for the second it in two days. Lawyer Bassam Bahar, head of the Local Committee for Defending East Jerusalem Lands, said a large military force, and an armored bulldozer, invaded the area, and removed the tent that was installed by nonviolent activists.

Bahar added that the Palestinians, and their Israeli and international supporters, will continue their activities to counter the illegal Israeli plans, the construction and expansion of illegal colonies, despite all challenges and ongoing military violence.

The activists installed the Jerusalem Gate protest tent village, on Tuesday, and the soldiers invaded the area and removed the tents, but they rebuilt it shortly after it was removed.