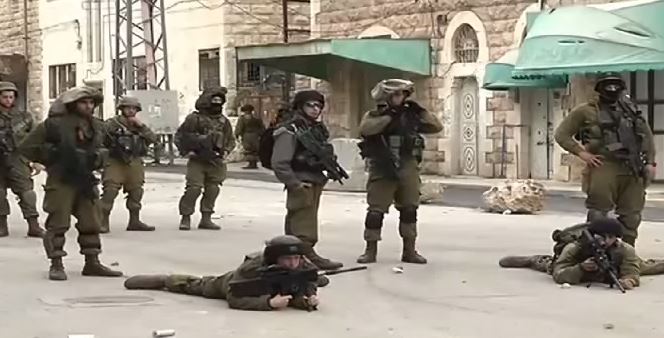 Palestinian medical sources have reported that two children were injured, on Thursday evening, after several Israeli military vehicles invaded Ya’bad town, southwest of Jenin city, in the northern part of the occupied West Bank. Soldiers also kidnapped a child, and a wounded young man, in Hebron.Head of the Ya’bad Local Council, Samer Abu Bakr, said the soldiers invaded the town, and drove around in its street, before clashing with local youths who hurled stones and empty bottles at the invading forces.

Medical sources said Mahmoud Bassam Hamarsha, 14 years of age, was shot by a live round to his leg, and Abdul-Rahman Khader Mer’ey, 16, was shot by the dumdum expanding live round. Many residents received treatment for the effects of tear gas inhalation.

The WAFA Palestinian News Agency said the soldiers also invaded a coffee shop, near the schools’ area in the town, and attacked a number of local youths.

Abu Bakr said many families were unable to return to their homes due to extensive military deployment, and the large number of gas bombs, and live rounds, fired by the soldiers.

Also on Thursday evening, soldiers kidnapped Sa’ad Mohammad al-Haddad, 21, after shooting him in the leg, near an army roadblock in the Old City of Hebron, in the southern part of the West Bank.

The soldiers moved the wounded man to a military base, before transferring him to an undisclosed location.