Soldiers Kidnap Two Palestinian Children In Hebron After Assaulting Them 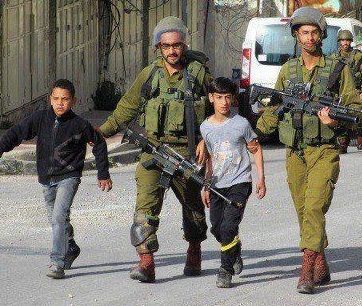 Israeli soldiers attacked, on Friday, two Palestinian children in Masafer Yatta, south of the southern West Bank city of Hebron, causing various injuries, and kidnapped them. Coordinator of the Popular Committee against the Wall and Settlements in Hebron, Rateb Jabour, said the two children have been identified as Qusai ‘Ayed ash-Shawaheen, 12, and Hamza Ahmad Ash-Shawaheen, 12.

They were herding the family sheep in the Khirbet al-Jaway nearby area, close to the Ma’on illegal Israeli colony, built on Palestinian lands in Masafer Yatta.

The attack is part of ongoing violations carried out by Israeli soldiers, and Israeli extremists, in different parts of the West Bank, especially in the Hebron district.