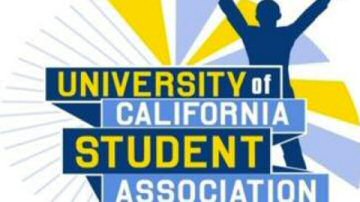 Hundreds of students gathered in UCLA Sunday morning as the UC Student Association (UCSA) deliberated motions in support of divestment from companies engaged in the systematic violation of Palestinian rights in the Occupied West Bank and Gaza Strip. Students from across California arrived to speak in favor of divestment, and to highlight the nearly 90 student organizations across the state which joined the call for the UCSA to endorse divestment. The historic vote passed in an overwhelming majority of 9-1 with 6 abstentions (click here to read the full text of the divestment motion).

The UC Student Association is the official voice of the student body of the University of California, and represents hundreds of thousands of undergraduate and graduate students across the UC system. Today it became the first multi-campus student association to vote in favor of divestment. This landmark vote is undoubtedly the largest victory thus far in the campus divestment movement in the United States.

Since 2012, UC Irvine, UC San Diego, UC Berkeley, UC Riverside, UC Los Angeles, and UC Davis have passed resolutions through their campus undergraduate student governments calling on the UC Regents to divest endowment and pension funds from companies such as Raytheon, Hewlett-Packard, Caterpillar, and Cemex, which facilitate and profit from Israel’s occupation of the Palestinian territories, its construction of settlements in contravention of international law, its violent bombing campaigns in Gaza, and its construction of checkpoints and walls throughout the West Bank. In addition, the statewide union representing teaching assistants, tutors, and readers – UAW 2865 – recently held a statewide membership vote which resulted in nearly 2/3rds support for divestment.

Students for Justice in Palestine chapters and their many allies across the UC applaud and celebrate the UCSA’s decision to affirm student activism, endorse the divestment call, and carry it forth to the UC Regents.

The External Vice President’s office at UC Riverside addressed the issue of accountability, stating: “We are aware of the unfortunate reality of a Board of Regents that has a very poor record of accomplishment of respecting democratic calls by the student body of the University of California…As firm believers in backing up words with action, we look forward to ensuring that the UCSA remains devoted to the follow-up work critical to an effective campaign.”

UCLA Student Safwan Ibrahim commented on the meaning of divestment to Palestinians at the UC: “As a Palestinian student in the UC system, it’s incredible to see the amount of intersectional solidarity across campuses, and to witness the shift in conversation regarding support of Palestinian human rights. It is especially inspiring to see the UCSA representatives take up the responsibility of carrying our voices to the Regents.”