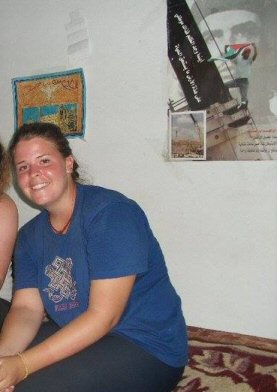 Kayla Mueller volunteered with the International Solidarity Movement from August to September of 2010.

On 4 August 2013 Kayla, 26, originally from Prescott, Arizona, was working with Syrian refugees when she was kidnapped after leaving a Spanish Doctors Without Borders hospital in Aleppo. Since that time she has been held in captivity by Da’esh (ISIS). This information was not previously released publicly out of concerns for her safety. On February 6th, Da’esh announced that she had been killed by Jordanian airstrikes in Raqqa, northern Syria. The validity of their announcement has not been confirmed.

Our hearts are with Kayla, her family, friends, and all those who have lost liberty, lives and loved ones in the global struggle for freedom and human rights.

With the ISM, Kayla worked with Palestinians nonviolently resisting the confiscation and demolitions of their homes and lands. In the Sheikh Jarrah neighborhood of Occupied East Jerusalem, she stayed with the Al Kurd family to try and prevent the takeover of their home by Israeli settlers.

Kayla accompanied Palestinian children to school in the neighborhood of Tel Ruimeda in Al-Khalil (Hebron) where the children face frequent attacks by the Israeli settlers and military. She stayed with villagers in Izbat Al Tabib in a protest tent to try to prevent the demolition of homes in the village. She joined weekly Friday protests in Palestinian villages against the confiscation of their lands due to Israel’s illegal annexation wall and settlements.

Kayla published writing online about her work in Palestine with the International Solidarity Movement in August and September 2010. “How can I ignore the blessing of freedom of speech when I know that people I deeply care for can be shot dead for it?” she wrote.
Below are excerpts from two of Kayla’s posts.

‘The smell and taste of tear gas has lodged itself in the pores of my throat and the skin around my nose, mouth and eyes. It still burns when I close them. It still hangs in the air like invisible fire burning the oxygen I breathe. When I cry tears for this land, my eyes still sting. This land that is beautiful as the poetry of the mystics. This land with the people who’s hearts are more expansive than any wall that any man could ever build. Yes, the wall will fall. The nature of impermanence is our greatest ally and soon the rules will change, the tide will turn and just as the moon waxes and wanes over this land so too the cycles of life here will continue. One day the cycle will once again return to freedom.’

On New Year’s Day of 2011, Kayla received news that Jawaher Abu Rahma, from the village of Bil’in where Kayla had demonstrated in solidarity with her and her family, had been killed by tear gas asphyxiation. On the first of January 2011, Kayla wrote:

‘I felt compelled to blog on this today. The first day of 2011, the actual day that she died, just a few hours ago in a village called, Bil’in.’

‘Every Friday in Bil’in villagers and international/Israel activists march to the barbed wire fence where an enormous and expanding illegal settlement is visible to protest the theft of their land and their livelihoods. The Palestinians are armed with rocks, the other activists with cameras and collectively they are armed with their bones. Each Friday the demonstration is met with violence; rubber-coated steel bullets, tear gas and sounds bombs are the usual choice of artillery. Lives are taken as a result of the violence and Jawaher Abu Rahmah’s life was taken today.’

‘My first demonstration in Palestine was in Bil’in and that is when I met Ashraf, Jawaher’s brother. Despite his broken English he always made a point to make sure we were ok when we were at the demonstration in his village, to help us cough up the tear gas and walk off the anxiety. He showed us his village and we played with the kids. Ashraf would bring us water or tea and help us find rides out of the village back to the cities. In the summer of 2008, Ashraf was participating in the demonstration and was detained by the Israeli Defense Forces (IDF). After he was blind-folded and his hands bound, an IDF soldier shot him in the foot from a distance of about 2 meters shattering his toes and leaving him in trauma as one could imagine.’

(As with all of these video clips, the content may be too graphic for some, please use discretion).

‘Just the next year in 2009 Ashraf’s brother, Bassem Abu Rahma, was participating in the demonstration and was attempting to communicate with the IDF soldiers telling them to stop shooting the steel-coated rubber bullets as an Israeli activist had been shot in the leg and needed medical attention. Not soon after an Israeli soldier illegally used a tear gas canister as a bullet hitting Bassem in the chest, stopping his heart and killing him instantly.’

‘And now just today, the daughter of the Rahmah family, Jawaher, has been asphyxiated from tear gas inhalation. Jawaher was not even participating in the weekly demonstration but was in her home approximately 500 meters away from where the tear gas canisters were being fired (by wind the tear gas reaches the village and even the nearby illegal settlement often). There is currently little information as to how she suffocated but the doctor that attended her said a mixture of the tear gas from the IDF soldiers and phosphorus poisoned her lungs causing asphyxiation, the stopping of the heart and death this afternoon after fighting for her life last night in the hospital. The following is a clip from today showing hundreds of Palestinians, Israelis and international activist carrying her body to her families home where they said their final goodbyes.’

‘This family has a tragic story, but it is the story of life in Palestine.’

‘Thank you for reading. Ask me questions and ask yourself questions but most importantly, question the answers.’