Palestine Shuts Down Amid Winter Storm 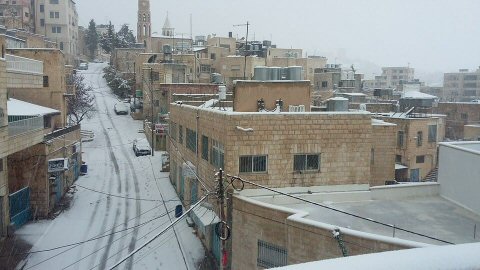 Shops and offices in cities across the occupied West Bank closed on Friday, after a major winter storm struck the region, leaving nearly half a meter of snow in some areas.Snowfall began late Thursday and continued into the early morning, Friday, blanketing hilltops across the region with a thick layer of snow that closed streets and major thoroughfares, according to Ma’an.

Frigid rain continued to pummel the region Friday night, and was expected to continue into Saturday, while temperatures slowly rise from the storm — named ‘Jana’ by meteorologists — as it continues south.

Emergency services said that, as of this afternoon, there had been 16 storm-related car accidents and that rescue services had been involved in at least 215 cases since the beginning of the storm, the majority of which involved individuals being brought to the hospital.

Snow plows roamed the streets of the West Bank’s major cities, opening up roads, but the Ministry of Public Works and Housing said that, in many areas, the vast majority of roads were still shut.

The ministry stated that, in the Hebron region, 80 percent of internal roads were closed by the snow, while Israeli-controlled Route 60 was open, but extremely difficult to navigate.

Meanwhile, in Bethlehem, all major roads were open but the ministry asked residents to stay in their homes as the majority of roads remained in precarious or difficult condition.

In occupied East Jerusalem, the heavy snowfall has also shut down major roads. Due to the reported failure of the Israeli municipality to clear roads in Palestinian neighborhoods, locals in many places had ventured out to re-open streets.

At the Al-Aqsa Mosque courtyard, hundreds gathered to take part in a massive snow fight, taking advantage of the unusually cold weather and fresh white blanket covering the third-holiest site in Islam.

Snowfall also hit Palestinian communities inside Israel where it is rarely seen, including Nazareth, in the Galilee, Abu Ghosh, to the west of Jerusalem, in addition to Beersheba and Bedouin communities in the Negev desert, to the south.

Power failures were reported in the southern Israeli city of Arad, as crews struggled to cope with the storm’s impacts on the country’s infrastructures. Several major highways, including Highway 1 and 443, into Jerusalem, were still closed as of Friday afternoon.

Meanwhile, frigid rain and hail pounded Gaza and the Palestinian coast overnight and into Friday, with at least 1.8 million in the region struggling to survive amid the usual power cuts and limited access to fuel for generators.

Furthermore, around 110,000 people were left homeless by Israel’s summer assault on the Strip that left around 2,200 dead, as well. Tens of thousands of these people are still being housed in substandard, unheated dwellings.