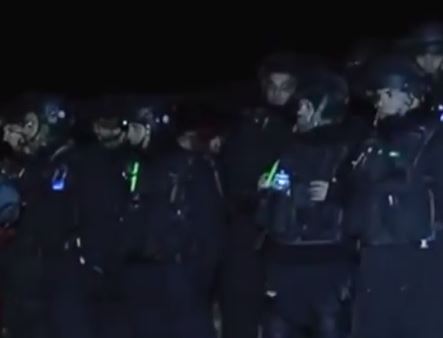 Dozens of Israeli soldiers invaded, on Monday morning, the Jerusalem Gate protest village, in Abu Dis town, east of occupied Jerusalem, and demolished it for the ninth consecutive time.Hani Halabiyya, spokesperson of the Popular Resistance Committees, said scores of soldiers surrounded the village, and stormed it along with a military bulldozer, and various armored vehicles.

Halabiyya added that the soldiers demolished the structures, and confiscated them.

The invasion was carried out after at least 30 army vehicles surrounded the area, and declared it a closed military zone.
It is worth mentioning that nonviolent Palestinian, Israeli and international activists rebuilt the Jerusalem Gate village, on Wednesday, shortly after the army demolished it.

The village was installed for the first time nearly three week ago, on the Khallet ar-Raheb area, east of Abu Dis, to protest Israel’s decision to displace and relocate the Bedouin communities so that it can continue its construction and expansion of its illegal colonies.

Activists said the ‘plan to displace Bedouins is a demographic bomb that Israel is using to empty Palestinian lands of its original residents, steal their properties, and the rights to return to the original villages that they were displaced from.’