Senior Israeli Journalist: Gaza Will Blow Up in Israel’s Face 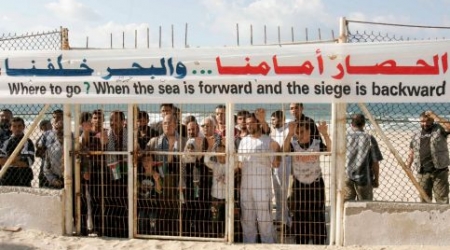 Senior Israeli defense correspondent Alon Ben-David, Monday, warned of the consequences of keeping a firm grip on Gaza, noting that it will blow up in Israel’s face not Egypt’s. Meanwhile, Ismail Haniyeh, of the Hamas party, stated Sunday that Palestinian resistance will remain directed towards the Israeli occupation, and will not be involved in any conflict with a third or Arabic party.Ben-David explained, in a report, that the situation in the Gaza Strip has become worse than ever, with the delay on reconstruction projects, as donor funds remain largely inaccessible.

Al Ray reports that the affected people, whose houses bombed during the last Israeli offensive against Gaza, are buying cement on the black market, as they do not have the money to rebuild their homes.

‘Given that Hamas is not interested in any escalation with Israel, this status will not last forever,’ Ben-David noted. He further explained that, as the humanitarian crisis in Gaza gets worse and worse, with more than 25 families now homeless, Hamas will be forced, as there is no another choice, into another military escalattion with Israel.

He pointed out that Hamas keeps working on developing the capabilities of medium and short-range missiles in order to prove their ability to inflict considerable damages more than other types.

Default Hamas rockets are typically crude constructions, equipped with no guidance system and lacking little relative force, in comparison to the weapons used against resistance forces and Gaza civilians by Israel. Furthermore, the projectiles tend to fall in sparsely populated areas of the Negev.

Regarding the establishment of a sea port in Gaza, Ben-David said that senior Israeli officers and leaders in Israel’s security services no longer reject this idea. He suggested that a small artificial island could be built off the Gaza shore, connected by bridge with Gaza, to be as a port.

‘We could destroy it in case of any escalation,’ he said.

He said that this idea has gained the support of Israeli army for the first time since its withdrawal from Gaza. It will also clear Israel from responsibility towards Gaza.

Al Ray further reports that the deputy chairman of Hamas’ political bureau, Ismail Haniyeh, stated on Sunday that the weapon of Palestinian resistance will remain directed towards the Israeli occupation and will not be involved in any conflict with a third or Arabic party.

During a visit to a number of freed detainees in Rafah, in the southern Gaza Strip, Haniyeh said that Hamas as well as its military wing, the Izz ad-Din al-Qassam Brigades, will not be entering into any such conflict.

‘Although we are not satisfied with the siege and creating the buffer zone, the Egyptian army is not an enemy and we will not turn the gun towards them,’ he stressed, adding that the weapon of Palestinian resistance is for fighting the Israeli occupation.

Egyptian media insists on alleging that Hamas and its military wing of carrying out terrorist attacks in Sinai, and Hamas, in turn, refuted these allegations.

A boost in Egyptian security services began last October an eviction campaign along the border with Egypt. They announced that they will create a buffer zone 500 meters wide and, then, modify it to one kilometer. The Egyptian military has evicted residents from more than 680 houses since the beginning of the campaign, displacing thousands of Egyptian Bedouins.

In a statement published on the official website of the Egyptian Ministry of Defense, the army attributed the creation of the buffer zone to existence of underground tunnels.

Since the ousting of Egyptian ex-president Mohammed Morsi, in July of 2013, the relationship between Egypt and Hamas has been under strain, as Egyptian authorities tighten security measures along the border with Gaza, in coordination with Israel.

It has reportedly destroyed all tunnels, in addition to blocking Rafah border crossing save for a few days, with regard to humanitarian cases.

Israeli settlements existed in Gaza until Israel evacuated them in 2005, under a unilateral disengagement plan. Following this move, the siege was imposed and the conflict in the region increased to a devastating level.