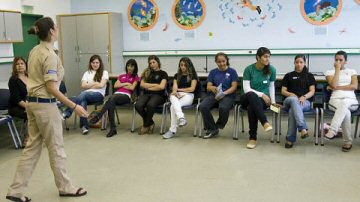 The Israeli army has begun targeting girls for future service in its technological units through a new partnership project with 25 high schools throughout the country, according to the Israeli media outlet nrg.The plan, initiated by the Women’s Affairs Advisor to the Chief of Staff, aims to fill existing gaps in the military personnel needs for technological positions with female soldiers.

Additional female soldiers will attempt to identify and push appropriate ninth grade girls to begin science tracks in high school, during which they will visit the army’s technological units.

Statistics from the army’s human resource division highlight a decline in the number of high school students who take a full, five unit matriculation exam in math, as well as a lack of some 400 engineers and scientists in the army.