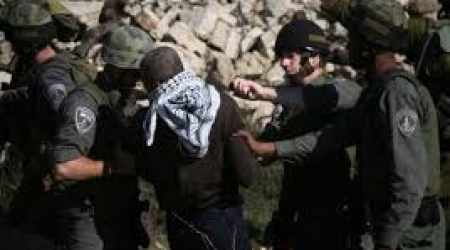 Israeli forces, Saturday, abducted three Palestinians, including a head of a village council, as well as summoned two others for interrogation, according to reports by security sources.According to WAFA, Israeli forces stationed at a checkpoint to the west of al-Jab‘a village, southwest of Bethlehem, detained two Palestinians while they were tending their farmland.

The detainees were identified as Head of the Village Council Nu‘man, 50, and ‘Ikrima Hamdan.

The two were reportedly handcuffed and interrogated before being led to an unknown destination.

Forces also raided al-‘Ubeidiya town, to the east of the city, where they summoned two Palestinians for interrogation.

Salamah Shanayta, age 26, and Walid Hasasna, 22, were served with notices ordering them to appear before Israeli intelligence in the military base of Gush Etzion.

Meanwhile, in Hebron, soldiers took 19-year-old Imad al-Rajabi near the Ibrahimi mosque in the Old City.

They also set up roadblocks in several Hebron neighborhoods, as well as at the entrances of Sa‘ir and Halhul, where they stopped and inspected vehicles with Palestinian registration plates and examined passengers’ ID cards.