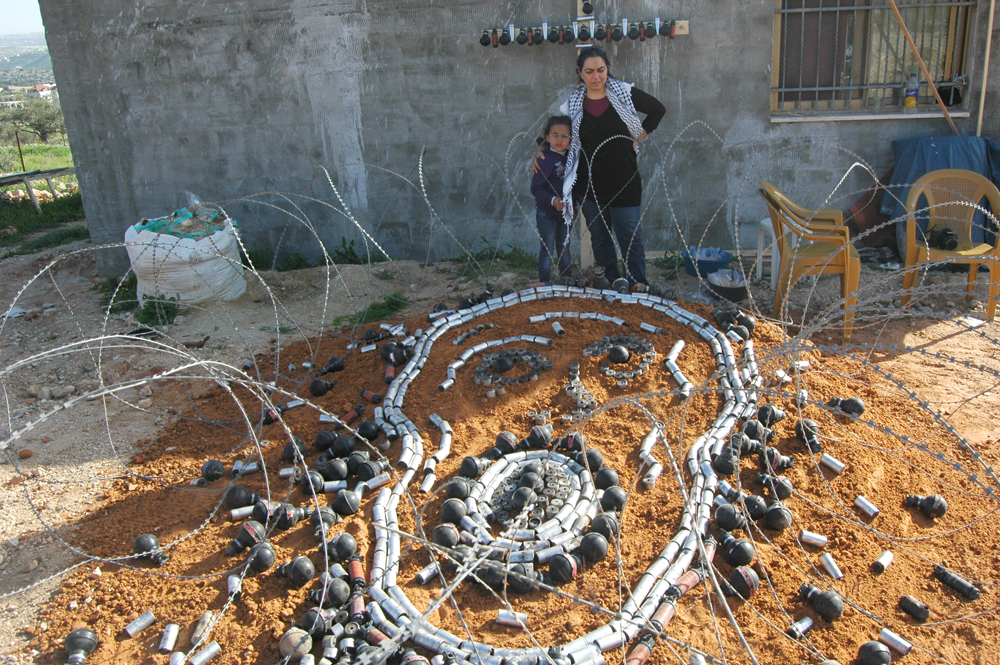 Plumes of teargas wafted up the terraced hillside of the West Bank village of Bil’in on Friday when over 1,000 demonstrators marked ten years of weekly protests against Israel’s separation wall and occupation outside of Ramallah. Israelis drove in from Tel Aviv, and international activists and Palestinians from nearby towns flocked to march from the center of Bil’in to the hamlet’s agricultural grounds. As they do every Friday, clashes ensued once protesters reached the outskirts of town where olive orchards and patches of vegetable farms buffer Israel’s concrete barrier and one of the most populated settlements, Modi’in Illit.

Two Palestinians were injured with live fire, and the army detained four.

Palestinian youths carried the flag of their occupied nation, with many sporting black tee-shirts with an outline of Ziad Abu Ein, a Palestinian minister who died in the winter after a confrontation with Israeli soldiers during an olive planting to commemorate International Human Rights Day.

“Listen to that, we destroyed the jeep” said Ahmad Abu Rahme, 21, while resting under the shade of an olive tree near the wall as stones clanged against an army vehicle. Close by Ahmad’s childhood friends lobbed stones. “We grew up like this,” he said, recounting Bil’in’s first protest a decade ago. At that time, Ahmad’s father did not want him to protest, fearing an encounter with the Israeli army could lead to arrest or injury. Now ten years later, Ahmad’s father joins him on Fridays and weekly protests have become staple family outings.

Bil’in’s Friday demonstrations started in 2005 when Israeli soldiers arrived to construct the separation wall at the edge of the town. The army wanted to build a cement barrier between a then uninhabited settlement neighborhood in Modi’in Illit and Bil’in. “Everybody from the village, we went to stop the bulldozer from cutting olive trees,” said Hamde Abu Rahme, 27, the celebrated photojournalist from Bil’in who documents the weekly protests. “At this time I was only 17 years old. And we tried our best to stop this.”

Within the year left-leaning Israeli activists from the group Anarchists Against the Wall joined the Friday demonstrations. Two years later a dozen of other villages facing land confiscations started their own weekly marches. Yet it was Bil’in that became the symbol for Palestinian non-violent resistance, a term that is debated because often the marches end in stonethrowing from the town’s youth. Bil’in is also recognized for creativity and costume. Villagers have come out in Santa Claus suits and blue alien garb and body paint modeled off of the movie Avatar. Once protestors even had an Israeli dress as Mahatma Gandhi and a Palestinian as Martin Luther King Jr. The press images of unarmed renowned peacemakers and cinema characters fleeing from the Middle East’s strongest army and its gun fire were so compelling that it catapulted Bil’in to become the West Bank’s real-life David and Goliath tale. What is now referred to as the Palestinian non-violent movement was born.

Bil’in suffered losses over the decade of dissidence. Regularly the army tear gassed and shot live fire into the crowds at the Friday protests. Two of Abu Rahme’s cousins were killed during such clashes. Bassem Abu Rahme, 31, was slain in 2009 and Jawaher Abu Rahme, 36, died in 2011 from asthma related complications after inhaling tear gas. Bassem Abu Rahme’s killing and the confrontations between villagers and the Israeli military were featured in the Academy-Award-nominated film Five Broken Cameras by Bil’in native-turned-celebrity Emad Burnat and Israeli filmmaker Guy Davidi. Although the army conducted investigations that trailed on for years, no soldier was ever charged in either of the cousins’ deaths.

And Bil’in lost land. By the time Israel’s army completed construction of the separation wall in 2008, around 2,000 dunums of Bil’in’s farmland was trapped behind the Israeli side of the barrier. Then in 2010 Israel’s high court intervened after a leading Israeli human rights law firm, Yesh Din, filed a petition. The jurists ruled that the path of the wall must be re-routed because it was built on privately owned Palestinian land. Still the new route took more than 650 dunums. Bil’in’s legal victory is widely seen by Palestinians as a win for popular resistance against settlement encroachment on Palestinian territory. And the protests continued. Bil’in villagers want to get the rest of their land back that the settlers usurped.

“As Palestinians you always lose, but we got something and it’s not for nothing of course,” Abu Rahme continued. “We got more than a thousand dunums back. It’s our land. It means it’s [popular resistance is] working, no? This is a good thing. And I think also Palestinians must struggle elsewhere,” Abu Rahme added.

“I believe with all my heart. I don’t just go to demonstration and say Palestine will be free, I truly believe it,” said Mohammed Hamad, 22. Hamad is from Bil’in and works two jobs in the West Bank’s economic center, Ramallah. His days are spent in a multimedia studio. At night he is a waiter in an upscale bar. Although he work days end at 4 am, Hamad rarely misses a Friday protest and comes dressed in lab goggles, eye protection against potent tear gas.

“I will never stop protesting. Just when Palestine is free then I will stop and go another country and protest there until they are free too,” said Hamad.
Tear gas canisters collected at the end of Bil’in’s tenth anniversary protest, February 27, 2015. (Photo: Allison Deger)

After three hours Friday, Bil’in’s demonstration thinned. Internationals lounged on boulders, snacking on chips and drinking soda with locals. A few curled up for a nap on the sofa of the town’s media center, a modest building plastered with posters of Bil’in’s fallen demonstrators and political figureheads.

Meanwhile Hamad headed home. He walked uphill where he met Rana Bishara, 43, a Palestinian visual artist from the Galilee in northern Israel who lives in Beit Jala, outside of Bethlehem. Bishara sat on a plastic chair in front of two sculptures she made that morning from spent tear gas canisters and pieces of barbed wire from an army fence that buttresses the separation wall in Bil’in. Though she is not from the West Bank, Bishara regularly travels to different villages active in popular resistance against the wall. “We are under illegal occupation and our resistance is legal,” she said.

Some local officials attended the tenth anniversary protest: Palestinian Liberation Organization executive committee member Dr. Mustafa Barghouthi and the mayor of Ramallah Dr. Laila Ghannam. But Bishara has more faith in demonstrations like Bil’in than the recent actions taken by Palestinian leadership at the United Nations, seeking a Security Council resolution that recognizes Palestinian statehood, or joining the International Criminal Court (ICC). At the end of this month, Palestinian officials have indicated they will charge Israel with war crimes relating to Gaza and settlements in the West Bank.

Bishara scoffed at the Palestinian government’s hopes of achieving a trial against Israel. “It’s a big joke,” she said. “Only a small portion of the Palestinian population support the leadership.”

Comparing the Palestinian Authority’s two decades of failed negotiations that failed to reduce Israel’s occupation to the five years of protests in Bil’in that led to Israel’s high court ordering a return of confiscated land, Bishara says she has more faith in Palestinian villagers than their leaders.

Hamad agreed; overall the government is wasting its time. “We are not unified and for that I feel shame,” he said.

“There are some people in the government who say they are with the popular resistance, but if you are really with the people, don’t stop them from protesting at Beit El or Qalandia,” said Hamad, noting that Palestinian security forces break up demonstrations at Israeli checkpoints or settlements as a provision of the Oslo accord, which mandates security coordination between Israelis and Palestinians. “So we are under an occupation, under occupation.”