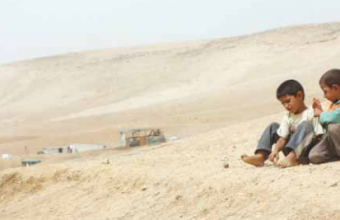 ‘This is vandalism through which they plan to displace the Bedouins from the Negev so as to create a Jewish state free of Arabs. However, my message to them is that if you turn over the land a million times, and if you demolish our homes a thousand times we will continue to live on this land and won’t allow any body to take it from us.’

The land that was leveled was granted by the Israeli state to compensate for the loss of land resulting from forced displacement in 1954, Freijat said.

‘Since 1983, there have been deliberations over our ownership and our right to this land, and in 2007 the supreme court decided that they (Israeli authorities) should reach a settlement with us, but so far they haven’t.’

‘We are talking about 25,000 dunums (about 6,000 acres) of wheat, barley and other crops. They demand that we rent this land from the Israeli land authority but we definitely oppose that because by doing so we recognize that we have no rights to this land.’

Bedouins in Israel live in 45 unrecognized villages scattered primarily in the region between Beersheba and Arad. They are the remnants of the Bedouin population that lived across the Negev Desert until 1948, when 90 percent were expelled by Israel and the remainder confined to a closed reservation.

In 2013, authorities said that the homes of the 1,500 residents of the village were to be demolished because the area had been converted into a closed military zone.