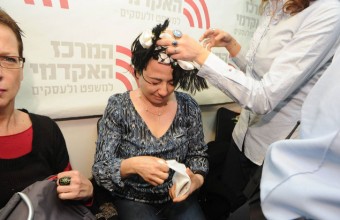 Israeli right-wing extremists, Tuesday afternoon, attacked Palestinian MK Hanin Zoabi who is running with the United Arab List for the upcoming Israeli elections on 17 March.According to the Palestinian News Network (PNN), Zoabi was giving a lecture in Ramat Gan college near Tel Aviv, when suddenly Israeli rightists threw glass bottles on her head, and spilled milk on her. Zoabi sustained moderate to light injuries due to the attack.

Arab supporters then were overwhelmed and protected Zoabi, then clashes broke out between Palestinians and Israelis.

The attack was sponsored by the extremist Israeli right-wing, which has strongly damaged Zoabi and initiated wide hatred attack against her.

Dozens of ‘Jewish Home’ party supporters have gathered in front of the college building to protest against Zoabi’s Palestinian students and leftist Israeli students attending the lecture.

Head of the Ramat Gan student senate said that without the security intervention, there could have been people killed in the clashes.