UN: Ending Israeli Siege is a Prerequisite to Gaza Prosperity 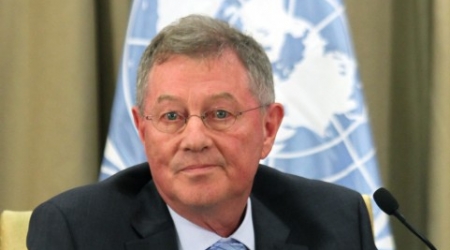 The United Nations has expressed concerns about the economic situation in the besieged Gaza Strip, saying that the lifting of the Israeli siege on the coastal enclave is the “prerequisite” for vitalizing its economy.“We, in the UN, have always been in the forefront in calling for an end to the blockade as a prerequisite for a stable, functioning economy in Gaza. You also cannot have a stable, functioning economy without a more durable ceasefire and a recognized, legitimate and inclusive government leading Gaza’s recovery,” the United Nations Special Coordinator for the Middle East Process, Robert Serry, said on March 2nd.

Press TV notes, via Al Ray, that the Gaza Strip has been under a crippling Israeli siege since 2007. The blockade, which has cut off the territory from the outside world, has led to an economic and humanitarian crisis in the densely-populated enclave.

The UN official further noted that the blockaded area suffered a crippling destruction during the latest Israeli onslaught, saying the area’s rehabilitation process would “take years.”

He said that “Gaza is a political problem which must be addressed as part of ending the occupation,” further adding: “I am convinced that there can be no peace without addressing Gaza’s needs first.”

He also referred to the delays in the provision of the aid the international community has promised to supply for the reconstruction of the Gaza Strip, saying, “This is, frankly, unacceptable.”

Israel not only defies international calls to lift the siege, but also does not allow construction materials into Gaza.

“I fully understand the frustration of people in Gaza,” the special coordinator said.

“Many of those who now have access to building materials lack the money to buy them or to carry out the works,” he added.

Israel unleashed attacks on the Palestinian territory in early July 2014 and later expanded its military campaign with a ground invasion of Gaza.

The war ended in late August that year. Nearly 2,200 Palestinians, mostly civilians, lost their lives and some 11,000 were injured in the attacks. Gaza Health officials say the victims included 578 children and nearly 260 women.

See: Senior Israeli Journalist: Gaza Will Blow Up in Israel’s Face for further links and coverage on this topic.