Sounds of Palestine: Social Empowerment for Children through Music 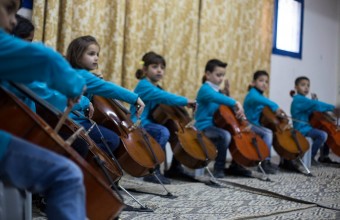 This Sunday, Sounds of Palestine organized the first winter mid-year concert, with the participation of over 70 kids who performed for their families in Aida Youth Center, playing violins, cellos, double basses, flutes and tabla, in addition to the singing of traditional Arabic songs.Sounds of Palestine is a project for children in refugee camps which combines music and social work. Children are taught how to play various musical instruments, as well as how to sing in a choir.

Specialized trainers, teachers and workers accompany them and supervise their work, providing a safe environment in which to learn and express their artistic skills.

Sounds of Palestine started in 2012, in two Bethlehem refugee camps.

Nearly 200 children, aged 4 to 6, will participate in music workshops twice a week. These workshops take place in three kindergartens in al-Azzeh and Aida refugee camps.

In 2013, around 40 children began first grade: normal school classes are followed by an afternoon of music programs, twice per week. Children take part in various activities, including musical and choral workshops, as well as instrument lessons.

During these workshops, the children will get a chance to empower their social and emotional development. Through singing, percussion, movement and musical games, they hone their social skills, as well as their teamwork and their mutual respect.

All workshops are based on the creativity and expression of the children, as they are attended by a social worker who follows a music leadership training with Musicians Without Borders, a program which offers extra social support to the children and their families whenever needed.

Fabienne van Eck, artistic director for Sounds of Palestine, who also worked as a project manager for Musicians Without Borders, shares her vision on the project’s long-term goals:
“Trained students will become the new music teachers and more centers will be opened so that the project will continue living,” she explained, before adding, “The organization of inter-cultural events, with the participation of different youth orchestras and individual children from various parts of the world, tickles their mind and makes understanding and cooperation possible.”

Inspired by the analogous Venezuela program called El Sistema, Sounds of Palestine uses music education as a medium to achieve long-term social change for the children and families involved.

One of the programs’ objectives is, in fact, to provide a safe space for children and youth to express themselves in a non-verbal and non-threatening way and to offer extra support for children with special needs. The teaching method includes both individual and group learning, so that cooperation and teamwork can be experienced and practiced. This has the additional benefit of introducing the children to a sense of social and civic responsibility.

Twice a year, a large performance is organized in which all the young musicians will perform.

“By engaging with music and learning an instrument, children acquire an important skill that helps them express themselves in a constructive manner, build self-confidence while the ability to concentrate and collaborate are developed”, van Eck explains.

A continuation of the music program is scheduled for two weeks, during the summer. In addition to regular activities, music gets combined with art activities and field trips, such as a day in the swimming pool, which represents the only occasion to swim for the majority of children.

The program plans to expand, every year, by accepting new children in the kindergartens and by continuing to work with the children who progress to the later school years.

Sounds of Palestine is realized in cooperation with Aida Youth Center, with the support of the Palestinian Ministry of Education and the UN Girls School in the Aida refugee camp.