Soldiers Kidnap A Lawyer Near Hebron 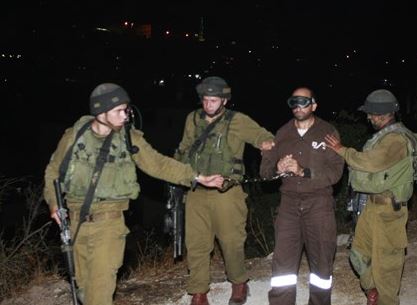 Dozens of Israeli soldiers invaded, on Thursday at dawn, the Safa area north of Beit Ummar town, in the southern West Bank district of Hebron, broke into and searched several homes, and kidnapped a lawyer.Mohammad ‘Ayyad ‘Awad, spokesperson of the Popular Committee against the Wall and Settlements in Beit Ummar, said the soldiers kidnapped lawyer Yasser Mohammad Ekhlayyel, 43, a former political prisoner who spent ten years in Israeli prisons.

In addition, soldiers stormed the home of detainee Mos’ab Qawqas Ekhlayyel, who was kidnapped by the army a few months ago, and ransacked his property.

The army installed roadblocks on the main entrances of Halhoul town, north of Hebron, and Sa’ir town, south of the city, stopped and searched dozens of cars and interrogated the residents while inspecting their ID cards.