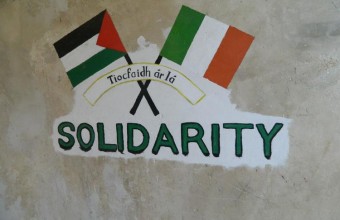 From 7th-14th March, the Ireland Palestine Solidarity Campaign (IPSC) will be hosting a week of informative and interactive events – including a public talk, film screenings and protest rallies – to mark the 11th annual Israeli Apartheid Week.Israeli Apartheid Week is an annual international series of events held in cities and on campuses across the globe, PNN reports. Last year was incredibly successful with over 200 cities taking part in 30 countries. IAW aims to raise awareness about Israel’s apartheid policies towards the Palestinians and to build support for the growing campaign of Boycott, Divestment, and Sanctions (BDS) against Israel.

IPSC Chairperson Martin O’Quigley said, ‘Unprecedented numbers of people took to the streets to protest Israel’s recent massacre of more than 2,300 Palestinians in Gaza, yet most governments and many corporations continue to provide Israel with support for its crimes. Israeli Apartheid Week is a chance to speak out about Israel’s most recent war crimes and all its violations of international law, as well as a way of campaigning to end international support for them and raising awareness amongst people in Ireland.’

Mr. O’Quigley continued, ‘Ten years on from the launch of the BDS campaign, this year’s Israeli Apartheid Week is also an opportunity to reflect on the success of the movement so far, and to build for the continued growth and impact of the international campaign for freedom, justice and equality for the Palestine people.’

Full details of all events in Ireland are available on the IPSC website: www.ipsc.ie/iaw2015