French Activists Arrested During Bil’in Protest to be Deported 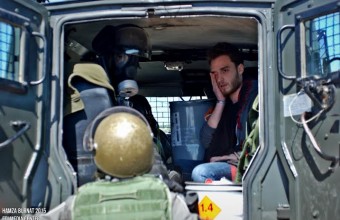 Israeli authorities decided to deport four solidarity activists, from the France-Palestine Solidarity Association, arrested while joining the people of Bil’in in their weekly demonstration against the occupation and apartheid wall, on Friday.International supporters have been joining the Bil’in demonstration for over 10 years now.
However, it’s the first time for the French delegation, who joined last Friday’s demonstration after listening to a presentation by the Popular Committee regarding the colonial oppression and resistance efforts of the village.

Soon after, the demonstration took off from the center of the village, heading to the wall. Dozens of participants suffered from tear gas inhalation during the march after the Israeli forces attacked them, just before they arrived to the area near the wall. The soldiers used jeeps to chase demonstrators towards the village, firing tear gas canisters and rubber-coated metal bullets.

Palestinians, international and Israeli solidarity activists raised Palestinian flags and chanted slogans calling for the demolition of the wall, freedom for Palestine and for prisoners in Israeli jails.

Israeli soldiers who disapproved of the French activists’ participation in the demonstration decided to arrest them and, later, made a decision to deport them, putting their names on the ‘black list’, according to Israeli sources.