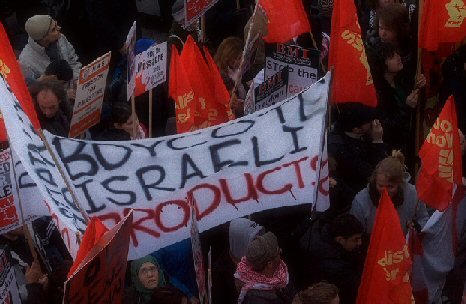 Chairman of the Jordanian anti-normalization union, Manaf Magali, announced the addition of 8 Jordanian trade companies and 40 international companies to the black list, as a part of the anti- normalization campaign.Al-Arabi al-Jadeed newspaper, according to Al Ray, quoted Magali as saying that the eight companies are in the business of exporting and importing agricultural products from Jordan to Israel and vice versa.

The 40 international companies listed are considered an important economic contribution for Israel, and Magali called for their boycott.

He revealed that some importers resort to fraud to import the Israeli products, by claiming that they are Palestinian or European products. The Jordanian agricultural ministry has denied the importstion of any Israeli fruits or products to the Jordanian local markets. However, the committee stressed that Israeli fruits are smuggled to Jordan via European ports.

The trade exchange between Jordan and Israel is estimated at some $140 million per a year, which is a significant declination from the recent years due to the boycott campaign and the last Israel aggression against Gaza.