U.S. Opens up to Hamas, Muslim Brotherhood, Syria and Iran 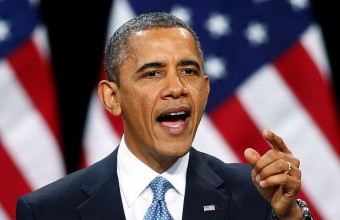 Edward Abington, former U.S. consul general in occupied Jerusalem, described the lawyer specialised in ‘conflict resolution’ as being an ‘American Jewish’ and that his appointment is a ‘positive development’. He was also described by U.S. national security adviser Susan Rice as ‘one of our country’s most respected experts on the Middle East, since February 2014 Rob has played a critical role in forming our policy on Iran, Iraq, Syria and the Gulf.’

However, the Zionist Organisation of America (ZOA) opposed the appointment of Malley for several reasons, stating that Malley is an ‘Israel-basher, advocate of U.S. recognition of major, unreconstructed terrorist groups Hamas and Hezbollah, and proponent of containment of Iran (i.e., not preventing them from attaining nuclear weapons) and proponent of negotiating with Syrian President Bashar Al-Assad (i.e. not changing his regime).’

He also believes that working with the Muslim Brotherhood is ‘not a bad idea’ and called Israel’s settlements located in the Palestinian territories occupied in 1967 ‘colonies’. He also called for abandoning the Road Map for Peace approved by the international Quartet in 2003 and replacing it with a comprehensive settlement plan to be imposed on the parties with the backing of the international community, including Arab and Muslim states. He did so before the Foreign Relations Committee in the U.S. Senate in 2004. He also continues to urge the Palestinian President Mahmoud Abbas, Fatah, Palestinian Authority and Hamas ‘to unite’.

Malley also called for ‘involving’ Hamas in the PLO’s negotiations with the occupation, explaining his statement by saying that the PLO must include Hamas because it has become ‘antiquated, worn out, barely functioning, and is no longer considered the Palestinian people’s sole legitimate representative.’ He also called for the resumption of negotiations between the Arabs and Israel ‘on all levels on the basis of the Arab peace initiative.’

The ZOA did not fail to mention his father, Simon Malley who was born and worked in Egypt as a journalist for Al-Goumhouria newspaper before moving with his family to France and founding Afrique-Asie magazine. The ZOA said that Simon Malley was ‘a virulently anti-Israel member of the Egyptian Communist Party, a close confidante of Yasser Arafat, and an enthusiast for violent Third World ‘liberation’ movements.’ As for his mother, Barbara Malley, she worked with the United Nations delegation of the National Liberation Front (NLF), the Algerian independence group.

Robert Malley was Barack Obama’s colleague at Harvard Law School and a Middle East affairs adviser for his 2008 campaign. However, Obama was forced to cast him aside due to the Zionist campaign against both of them after Britain’s the Times revealed that Malley had been in contact with Hamas.

He added that he used to inform the State Department about his meetings beforehand and briefs them afterward. During the same year, London’s Al-Hayat newspaper quoted deputy head of the political bureau of Hamas, Ismail Haniyeh, and Hamas official Dr Ahmed Yousef as saying: ‘We were in contact with a number of Obama’s aides through the internet, and later met with some of them in Gaza, but they advised us not to come out with any statements, as they may have a negative effect on his election campaign.’

Before this, Malley, who was a member of the U.S. negotiating team in the 2000 Arafat-Barak-Clinton summit at Camp David, was the target of an Israeli-Zionist campaign because he held all three leaders responsible for the failure of the summit, and not only the late Palestinian leader, who was repeatedly accused by Bill Clinton, Ehud Barak and their team of negotiators of causing the failure.

Morton A. Klein, president of the Zionist Organisation of America, said: ‘How exactly does someone, who is dropped as an adviser because he advocates recognition of, and meets with, the genocidally-inclined terrorist organisation Hamas, now became a senior adviser to the president, unless President Obama has all along agreed with much of what Malley thinks and advocates?’

Due to the fact that the appointment of Malley coincided with the crisis in relations between the U.S. and Israel, caused by the recent speech made by Israeli Prime Minister Benjamin Netanyahu before the U.S. Congress behind Obama’s back and without his approval, analysts have begun to talk about ‘changes in the U.S. role in the Middle East’ in the context of the Israeli media outlets and its Zionist and Jewish arms abroad.

They have also predicted that ‘there will be no doubt that the U.S. policy will be focused exclusively on pressuring Israel over the course of the last 22 months of Obama’s term,’ as written by Jonathan S. Tobin in America’s Commentary magazine on 10 March.

During this time, Obama will be ‘free of electoral pressure’ so the Obama administration’s treatment of the Palestinian issue is about to take on a much more aggressive attitude over the next two years. This will allow Obama to ‘invest the little political credit he has left in ‘bringing world peace’,’ as written by Alex Fishman in the Israeli daily the Yedioth Ahronoth.

In Fishman’s view, there are now two courses of work on the White House’s agenda. First, it can follow the path of the ‘European Initiative’ which proposes issuing a UN Security Council resolution for a ‘lasting solution in the Middle East’, while the second path involves waiting for the results of the Israeli elections this week, as it is a ‘renewal of the American peace initiative, which will have behind it a very skilled, determined person, who isn’t very fond of the current government: The president’s new man in the Middle East,’ Robert Malley.

It is clear that these courses of action, the appointment of Malley and his record will undoubtedly breathe life into the PLO’s negotiating team, especially since President Abbas repeatedly says that going to the UN and international organisations, as well as the latest PLO’s Central Council recommendations, do not necessarily mean that negotiations will be abandoned.

These negotiations can also be considered new material used by the American camp in the Arab League to justify its on-going pressure on the PLO to continue to rely on the United States.

The appointment of Malley indicates one conclusion: that the U.S. is heading towards a new initiative to resume negotiations between the PLO and the Israeli occupying power without making any changes to its references. If the PLO interacts and deals with the ‘European initiative’ then it is likely to deal and interact with any new U.S. initiative, according to all indications in this regard.

In this case, the PLO’s recent diplomatic actions not related to the negotiations and the United States has merely been ‘playing on borrowed time’ while waiting for the results of the Israeli elections.

However, these actions can still be built upon in order to completely depart from the American vision for the ‘resolution of the conflict’ in the event that Netanyahu is re-elected as prime minister.

On the other hand, Hamas should not be fooled by Robert Malley’s positions towards the movement, despite its importance, as it is an attempt to contain the movement and drag it into ‘negotiations’ between the PLO and Israel based on the same references rejected and opposed by Hamas thus far.

As for Malley’s performance in Iran, Iraq, Syria and the Gulf, over the past year, which was praised by Susan Rice, it has had catastrophic consequences on the ground that speak for themselves. Malley’s openness to Hamas, the Muslim Brotherhood, Iran and Syria is nothing more than tactical dealings in order to serve the unchanged U.S. strategy with forces that have proved their presence.

Appointing Robert Malley as White House Coordinator for the Middle East, North Africa and the Gulf Region is not a sufficient indicator of any radical change in the U.S. strategy that is on the verge of tearing the Arab world apart, along with its Islamic surroundings, unless it is deterred. This is true despite the Zionist campaign opposing his openness towards Hamas, the Muslim Brotherhood, Syria and Iran.

Nicola Nasser is a veteran Arab journalist based in Birzeit, West Bank of the Israeli-occupied Palestinian territories (nassernicola@ymail.com).

This article was translated from Arabic and first published by the ‘Middle East Monitor’.