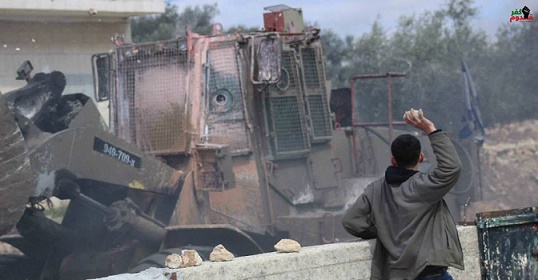 Murad Eshteiwy, coordinator of the Popular Committee in Kufur Qaddoum, said the soldiers used excessive force against the protesters, and fired rounds of live ammunition and gas bombs, in addition to spraying the protesters with wastewater mixed with chemicals.

The attack led to clashes between dozens of local youths and the invading Israeli soldiers.

The photographer was hurt after falling to the ground as a number of soldiers were pushing him around, along with other journalists, in an attempt to force them to leave.

Eshteiwy said a number of soldiers ambushed the protesters in an abandoned olive mill building, and detained Zahi ‘Ali, 47 years of age, for several hours before releasing him.

He added that the soldiers deliberately sprayed the home of Zohdi Eshteiwy with wastewater, before topping the building to use it as a military tower; soldiers also used the building to fire on the protesters.